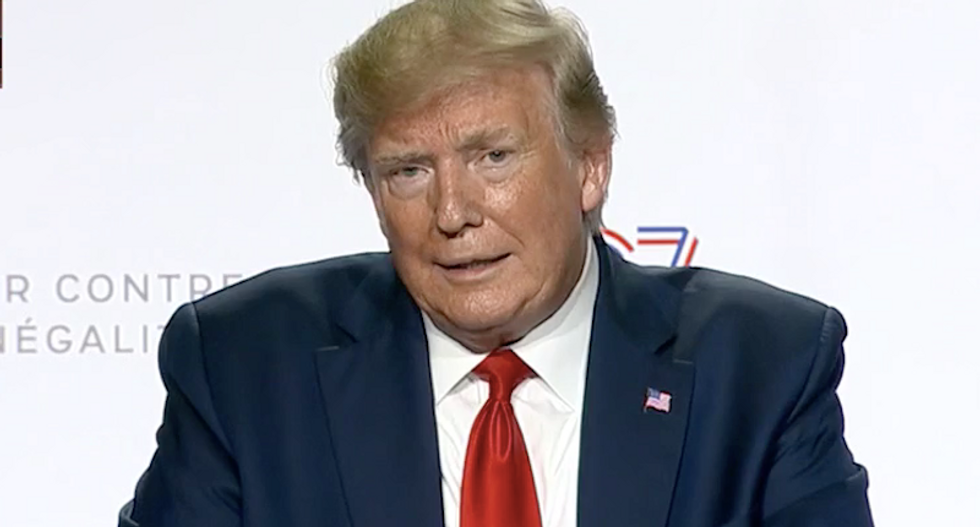 A new study finds that President Donald Trump's hardcore fans are driven by “chaos” and think “society should be burned to the ground.” That sentiment is often conveyed by Trump, who seems to delight in blowing up the norms of the executive branch: the president spent the summer riling up supporters at rallies by accusing The Squad--freshman lawmakers of color--of being unpatriotic.

Raw Story spoke with Dr. Bandy X. Lee, a forensic psychiatrist at Yale School of Medicine, about the president's fitness for duty and the psychological reasons he continues to inspire loyalty in his most ardent fans. Lee has taught at Yale Law School for 16 years. She is one of a handful of psychiatrists to consult on the World Health Organization’s launch of a public health approach to global violence prevention and is author of the textbook, “Violence.” At the onset of the current presidency, she held an ethics conference on the importance of mental health professionals to speak up and compiled the public-service book, “The Dangerous Case of Donald Trump.” She also convened a panel to assess the president’s mental capacity as well as a working group on an expert panel for performing independent fitness-for-duty tests. Now, she is authoring a “profile of the nation” that she hopes will serve as a primer for societal psychiatry.

Raw Story: As the summer ends, Donald Trump continues to drive an unbelievable news cycle. Yet there do not seem to be any more appearances of mental health experts since Brian Stelter’s program discussing the issue. What do you make of this?

Bandy X. Lee: We are avoiding the issue because the mental health problem in the president is very real. In psychiatry, avoiding the topic at all cost counts as proof that there is an issue. As a consequence, those who need care the most do not get it, just as our whole country is not.

Raw Story: So you think the president is unfit for duty?

Lee: We already know he is not. We performed a mental capacity evaluation on him—a standard test of the most basic criteria—and he failed conclusively. Without basic mental capacity, no presidential capacity, let alone capacity for most jobs, is possible.

Raw Story: Can you talk about the 25th amendment?

Lee: We will discuss it at Yale Law School this fall, in conjunction with the issue about silencing mental health experts. Legal scholars will address its unconstitutionality as well as harm to public interest. Treating psychiatry as a rarefied field has not only deprived the public of essential knowledge to protect itself, but it also stigmatizes and scapegoats patients, as in the president’s false attribution of dangerousness to mental illness recently. Misinformation is rampant.

Raw Story: What can people do?

Lee: The people can demand to have access to knowledge. For example, what does it mean when they are forced to accept a president who is unfit for the job? Far from overturning an election, do the people not have a right to know if the public servant they are employing does not have the basic qualifications?

If a mistake has been made, do they not have the right to make an informed decision? We are not a monarchy. Knowledge is power, and the key ingredient to self-governance. Further, every profession, every politician, and the free press have a duty to the people. Medical professionals, in particular, have a duty to society. Psychiatry is meant to restore health and to free the mind, not to promote ignorance.

Raw Story: Do you think that given how his followers respond to him he’s likely to be re-elected?

Lee: I think the current problem is that we are acting not only like an oppressed people, but a self-destructive one. The worst form of oppression, in my view, is the hijacking of the mind, and the dominant class—by this I mean the hidden 0.1% and not the intellectual class it often scapegoats—has achieved this. I had always wondered how Mr. Trump’s supporters came to possess their thought-controlled and cult-like quality—in their conformity, uniform chants, and reflexive thinking—it has exacerbated with Mr. Trump’s appearance but did not start with him.

Mr. Trump’s uncouthness and ability to detect vulnerabilities in desperate people for his own psychological reasons make him very useful for this controlling class. The exact mechanisms had remained a mystery to me, until I inadvertently stumbled into them when I agreed to be on a right-wing talk radio show. A figure evoking Jean-Paul Marat of the French Revolution, the host was pouring all his bitterness from life’s disappointments and paranoid rants into the airwaves. He would have remained on the margins of society, except the Koch brothers have heavily funded him and have given him a large platform.

The host’s plan was to discredit me, but what he did not realize is that, by inviting a psychiatrist, he was placing himself under a microscope. The “interview” immediately evoked an interrogation session or, more accurately, what renowned psychiatrist Dr. Robert Jay Lifton dubbed “the cult of confession.” “Are you a Democrat? Are you a liberal?” the host asked in the same manner that the Chinese Communists ask, “Are you an imperialist?” to a Western doctor in one of his studies. It does not matter what these things are, except that they denote “the other”—and if you are not with them, you are against them. What is impressive in the anecdote is how the doctor walks out into society after years of brainwashing to discover that the world is the opposite of what he had been told. I would have been reticent to call what is happening in our society “brainwashing,” but it mirrors exactly these documented Communist tactics, and the psychological effects are the same.

How is this possible in the age of Internet, you may ask? The way you can facilitate independence for life if you teach individuals to fish rather than provide for every meal, you can close the mind for life if you “immunize” people against real evidence, even without continuing to provide false facts. The host of the radio show revealed how he does this: his program and his books demonstrate distorted interpretations of facts (how to think) and pejoratively call outside sources “liberal news” or “unfree press” (what not to believe)—when he has far bigger, nefarious conflicts. He is teaching them to shun outside information. The pattern reveals itself more generally in how mental health experts are silenced, unable to share crucial information. Fox News, which has been eager to discredit me where it can, had done an unexpectedly excellent, lengthy interview of me, but it would not publish it—two-and-a-half months later, it still has not published it.

There is much more to say, but this will all be in my “profile of the nation,” fully annotated. Democracy is an evolved state of self-reliance, just like independence in an individual. Stunted development can make one desire dependence or submission to authority, which figures like Mr. Trump or the radio show host can help exploit.