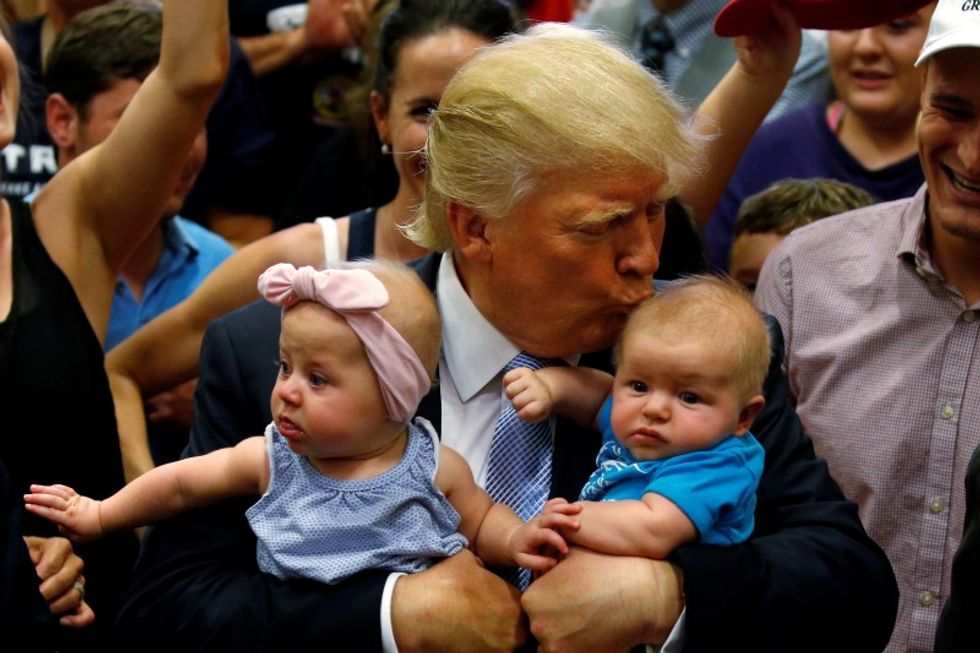 How revealing that just six deaths from vaping prompted Donald Trump to move Wednesday against e-cigarettes, while at least 276 deaths in massacres since he took office haven’t prompted any presidential move against assault rifles and other guns.

Even applying the twisted logic of the Second Amendment absolutists, Trump’s action is surprising since e-cigarettes don’t kill, people who vape kill.

Vapers kill only themselves, while people firing military-style assault rifles and other guns massacre innocents—school children, people at prayer in houses of worship, shoppers in malls and concert-goers.

A rational observer might expect that people who harm themselves by vaping would be low on the president’s list of priorities, especially given his roughly two-hour workday. The greater public concern, logically, would be mass murders of innocents.

Then there’s Donald’s concern with profits. During a 9/11 presser in the Oval Office, he said of vaping companies “they become very rich companies very fast, and the whole thing with vaping is a, is, it’s been very profitable, and I want companies...I fight for our companies very hard… because I view it as jobs. I view it as income for our country, and jobs.”

He did add he was concerned about young people who vape. Then he referred to his fifth child, Barron, saying “the First Lady got involved, and she's got a son.”

This is just the latest example of how logic, analysis, and sciences such as epidemiology are all alien to Trump, who told voters that the best advisers reside in his head.

Vaping deaths, coincidentally, equal the number of known deaths of migrant children in government custody since Trump took office. Trump’s response to those deaths has been quite different than his move against vaping.

Three of those migrant children died from the flu, an infectious disease that in a crowded environment like the cages that migrant kids are being held in can spread like wildfire. Despite this, the Trump administration says it will not provide vaccines for migrant children in custody. That is a big step up in child abuse from, its refusing to provide more than one pad per day to menstruating girls, not to mention soap, toothbrushes and toothpaste.

Those life-threatening and degrading experiences are far from the worst of it according to a 26-page declaration by Alma Poletti, who supervises investigations for the Washington state attorney general.

After visiting federal facilities holding migrant kids, Poletti described conditions for which any parent would likely be arrested and lose custody of their children. At these federally financed facilities she found rooms with:

…no windows to the outside and where lights were kept on 24-hours per day. Most of the children reported these detention facilities were freezing, kept at extremely cold temperatures. Children were only given “aluminum” blankets to keep themselves warm. Some of them had sweaters or spare clothes with them when they arrived at the detention facility, but these were confiscated by the immigration officers (the children referred to them as “officers” or “guards”) and they were never returned to them even if a child asked for warm clothes or additional blankets. One girl recalled instances when mothers who were detained with their children complained to the officers about the cold temperatures because their kids were getting sick. An officer would then grab the air-conditioner remote. After that, the room would get colder, as if the officer had been annoyed by the request and decided to lower the temperature even further…

Most of the children reported being hungry while detained due to insufficient food or because the food was so terrible that they could not eat it. Some children reported the burritos they were fed were cold or still frozen. Others complained the bread in the sandwich was hard and tasted like dirt, or that the ham seemed to have gone bad.

Some children complained that there was not enough water available for them to drink, so they were thirsty while detained. These children said they were provided small personal bottles of water with each meal, but they did not have access to drinkable water whenever they felt thirsty…

They [menstruating girls] were each given one sanitary pad per day. Although the guards knew they had their periods, they were not offered showers or a change of clothes, even when the other girl visibly bled through her pants. This girl had no choice but to continue to wear her soiled underwear and pants.

Half of the interviewed kids complained that it was very uncomfortable to use the toilets because they had no privacy to use them. Toilets were located inside the room where they were detained and only separated from the rest of the space by a low wall. Girls tried to make them more private by having other girls hold up aluminum blankets to cover them. One girl said toilet paper was sometimes an issue since it was refilled only once a day. If they ran out of toilet paper, they had to wait until the next day to get more.

The chief in loco parentis of these children is the president of the United States.

Yet he calls children whose parents brought them into our country without permission, at least at the Mexican border, rats, vermin murderers and rapists. But no one is holding him accountable for this child abuse. Nor does anyone seem to be comparing and contrasting the concern for e-cigarette users with that of innocents who get massacred or detained children.

Team Trump is not acting against vaping overall, by the way, just flavored vape. Sweet flavors are designed to addict children to nicotine, the reason people keep buying cigarettes and, now, vape supplies.  The vape makers, of course, insist that they don’t want children to use their products. In other news, e-cigarette makers announced that the sun rises in the West.

Vaping is 100% safe, a representative of Juul, the dominant manufacturer, told ninth graders at addiction and mental health seminar where teachers left the room, according to Caleb Mintz. He was one of the students who heard this message. He testified before the House Economic and Consumer Policy Subcommitteein July. (Watch the video at 40:00 to 44:00).

“Many kids were juuling and had their doubts” about e-cigarette safety before the talk, Mintz testified, and some “still thought it was possibly dangerous.”

But after being told vaping was “totally safe,” Mintz said, “for my classmates who were already vaping it was a sigh of relief because now they could vape without any concern.” And, he added, the assurance made other “kids were more inclined to vape because now they thought it was just a flavor device that didn’t have any harmful substances in it.”

There is no question but that guns have harmful substances known as bullets. Indeed, 145 chief executives of major corporations implored the White House this week to act on gun safety.

Gun owners are a minority. Seven in ten Americans don’t own a gun. And most who do possess only one firearm. Despite this, there are somewhere between 265 million and 393 million guns in America, which means there are a lot of arsenals out there built up by people who own 10 or more guns.

For every American who owns a gun there are 1.5 people who know someone who has been shot, intentionally or accidentally, the Pew Foundation’s research arm found two years ago.

So, here’s the three-tiered message from the mind of Donald Trump, not as he would put it, but as the facts show:

And that means Trump is all for preventing unintentional suicides, but not intentional homicides of Americans and children held in his detention camps.