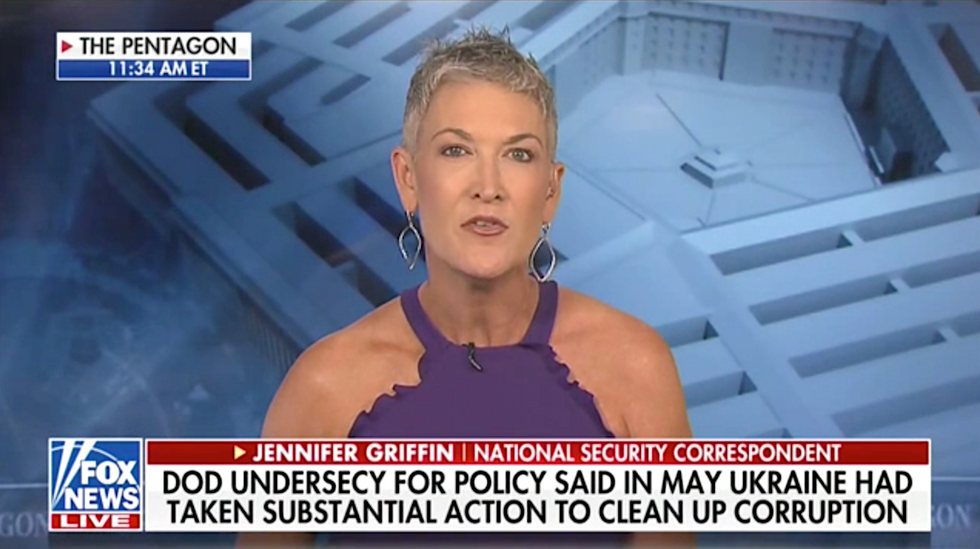 Earlier this week, President Trump rationalized his blocking of aid to Ukraine, saying that he did so due to corruption in the country's government. But according to a letter sent to four congressional committees in May, Undersecretary of Defense for Policy John Rood pointed out that Ukraine's government had "taken substantial actions to make defense institutional reforms for the purposes of decreasing corruption [and] increasing accountability."

It's a significant contradiction of Trump's rationale for withholding the aid -- significant enough for Fox News to highlight the development during a segment this Friday morning.

Speaking to Fox anchor Jon Scott, national security correspondent Jennifer Griffin said that the letter initially green-lighted $250 million in military aid from the U.S. to Ukraine and was finally released on September 11, "a day after congressman Adam Schiff, chairman of the House Intelligence Committee, made a formal request in writing to transmit the whistleblower to his committee."

"To date, about $225 million has been allocated, according to Defense officials," she said. "Senator Dick Durbin has called on the Pentagon Inspector General to investigate what the Pentagon knew and when its officials knew Ukraine military aid appropriated by Congress was being held up, allegedly at the direction of the White House."

"Mark Esper was sworn in as Defense Secretary two days before President Trump's July 25 phone call with the Ukraine president," Griffin continued. "Also of note, three days after that phone call, President Trump announces [Director of National Intelligence] Dan Coats will resign. On August 8, Trump bypasses Coats' deputy, Sue Gordon, for the Director of National Intelligence. Four days later, the [Inspector General] receives the complaint from the whistleblower who the current acting DNI, Joe Maguire, a respected former Navy SEAL, said under oath he believed the whistleblower is acting in good faith and did the right thing."

Watch the full segment below. You can also read NPR's original report on the story here.