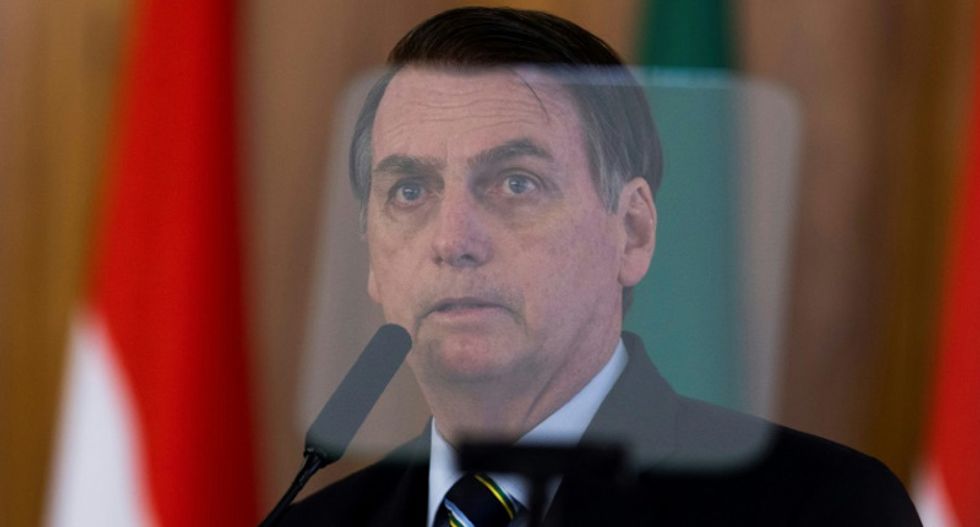 The man-made Amazon fires are for clearing the land of its forests and indigenous people. The benefits are for Jair Bolsonaro’s cronies, while producing a climate disaster for the world.

The Amazon fires in Brazil have become worldwide news. Explaining the fires recently, Douglas Morton, chief of the Biospheric Sciences Laboratory at NASA’s Goddard Space Flight Center, said that “August 2019 stands out” as a month with a far higher number of fires than any preceding year since 2010.

This is similar to what Brazil’s National Institute for Space Research (INPE) had reported earlier. The head of INPE, Ricardo Galvao, was fired on August 2 this year after INPE came out with figures based on satellite imagery that showed that deforestation in the Brazilian Amazon had increased by 40 percent in two months over a similar period last year.

That it is largely man-made can be seen from looking at where the fires have started in Brazil: mostly along the major highways and spreading into the forest. Clearly, it is an attempt to clear the forests for economic exploitation—logging, cattle ranching, commercial farming and mining—that lies at the heart of President Bolsonaro’s policies.

Speaking to reporters in the last week of August, Bolsonaro said, “It is too much land for so few Indians.” While he has declared a temporary moratorium on land-clearing due to the fires, the thrust of his policies is still to dismantle all obstacles to handing over the Amazon to big corporate and landed interests in Brazil.

Amazon forests are the world’s biggest store of carbon as well as its largest global sink. If it goes up in smoke, it will produce climate change on a scale not seen before. And this change could soon become irreversible, as once a forest starts dying, after a point, it becomes almost impossible to stop its downward plunge.

Apart from acting to fix atmospheric carbon, Amazon forests also help in the hydrological cycle that produces rainfall. The loss of forest cover in the Amazon would affect not only the world’s climate, but also the local climate in Brazil and neighboring countries, leading to less rainfall, and adversely affecting its agriculture.

While Brazil has taken the lead in a direct attack on the Amazon, with Bolsonaro adding a racial element to his attack on indigenous people, the pressure to open the Amazonian forests to agriculture, logging and mining is not just limited to Brazil. Obviously, why should other countries, which have finished their forests, argue that countries with forests keep them permanently for global benefit? Who pays and who gains is very much a part of the climate change negotiations—the Paris Accord—from which Trump and the United States have walked out.

This pitch—who pays and who gains—could indeed be a nationalist pitch for Brazil. But this is not Bolsonaro’s argument. For him, the only issue is that fires lit for clearing the Amazon should not burn without control: he must be shedding tears about all those logs that could have been sold for money going up in smoke.

He is asking President Trump, a fellow climate change disbeliever and another white nationalist, for help with dousing the fires. He has no sympathy for Brazil’s indigenous people—“Indians,” he calls them—bemoaning the failure of the Brazilian cavalry in “clearing” its indigenous people, unlike the U.S. cavalry, which was so much more efficient in its “extermination of the Indians.”

Before we address the complex issue of climate justice, indigenous rights and economic development, we need to address one misunderstanding on the role of Amazon forests. Amazon forests do not produce 20 percent of the oxygen the world needs, as is commonly said. It is the largest producer of oxygen on land, producing about 6-9 percent of the total oxygen that is produced globally, including from the oceans. Still, we cannot talk of producing oxygen without also asking how much of it the Amazon consumes. So we must see the net oxygen that the Amazon produces, meaning, subtract the oxygen consumed by it from what it produces. Once we do that, we find that the Amazon’s net output of oxygen is near zero, as it is also the largest consumer of oxygen. The Amazon’s value is in fixing atmospheric carbon, and its loss will mean the release of stored carbon into the atmosphere with devastating consequences.

Is it possible to use the forest lands economically such that we do not have deforestation with both local and global consequences? The argument is yes, this can be done using scientific methods and technology, such that we can get short-term developmental benefits as well as meet long-term goals. This would be different from the colonial models promoting mono-cultures and claiming forests on behalf of the Crown, but would mean involving the forest communities in protecting forests. It would mean culling forests, but within limits of its regeneration and using a mix of trees that are natural to the Amazonian environment. It would mean, if mines and other projects are allowed in them, to minimize their impact and leave large areas as untouched natural reserves.

Of course, this would require a policy for indigenous people that respects their identity while allowing them to choose how they integrate themselves; not as living museum pieces, but as communities living in harmony with nature and the rest of Brazilian society. These are complex issues and there is no one answer to these questions. Their answer would mean a democracy that allows for dialogue and a way to reconcile the goals of development and maintains peoples’ identities and cultural diversities.

Instead of taking this complex, democratic path, the logic of capital is quite simple. It prioritizes the interest of the capitalists—not capital but capitalists—over other sections of the people. For the capitalist, there is a simple way of looking at any issue: what return can I get if I can get the state to follow a certain policy? Giving away of land, forests and mineral resources to capitalists by the state is what Marx called primary—or primitive—accumulation. In the language of the commons, it is “enclosure” of the commons, and in this case, the Amazon forests are the commons.

If Bolsonaro can hand over forest lands—its trees, its minerals and their use after clearing forests for cattle-ranching or soybean-farming—to his capitalist cronies, they make big bucks. This is the crux of Bolsonaro’s policies. This is similar to what Prime Minister Narendra Modi is doing in India with the recent modification to the Forest Rights Act.

Both Brazil and India are expropriating the people’s rights over natural resources on a grand scale. This is what capital and their ideologues call releasing the animal spirits of capital.

Capitalism not only has the Trumps, Modis and Bolsonaros determine that what is good for capital is good for the people, but also other ideologues. One of them, American economist William Nordhaus, has built an economic model that essentially “shows” that it is better to spend money, not on preventing climate change today, but mitigating it in the future. There are two fallacies in this approach. One is that those producing climate change—either directly, through their emissions, or by consuming products that produce carbon emissions—are going to be impacted far less than those who produce much lower carbon emissions.

Unfortunately, the impact of such climate change is going to be far more adverse in tropical and equatorial regions of the world, where the bulk of the poor live. They also produce much less carbon emissions. The other flaw in Nordhaus-type models is that they privilege benefits received today over adverse effects in the future, the same way a capitalist looks at his profits: this quarter’s profits matter more than the long-term sustainability of capitalism itself.

Are other approaches and models possible? Yes, of course. A number of approaches that address both these issues exist. But climate science today has little to do with science; it is politics and the interests of capital that are deciding our climate future. Upton Sinclair, the American writer, had written in the 1930s, “It is difficult to get a man to understand something when his salary depends upon his not understanding it!”

Denying global warming is not a scientific mistake that the global right makes; it is simply who is paying the bill that determines their belief.

Prabir Purkayastha is the founding editor of Newsclick.in, a digital media platform. He is an activist for science and the Free Software movement.

This article was produced in partnership by Newsclick and Globetrotter, a project of the Independent Media Institute.