'You don't care about the kids': Top PA lawmaker berates public school teacher as a 'special interest' to her face 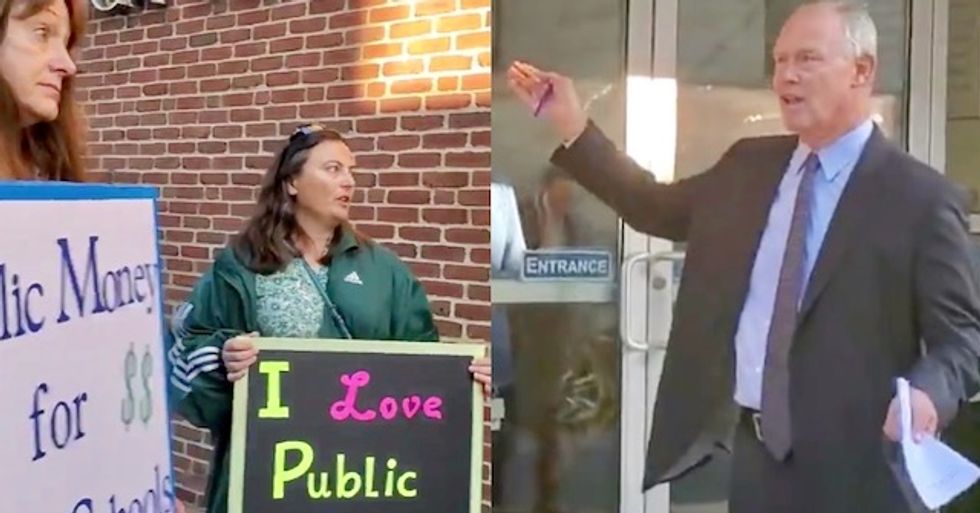 Public School Teacher and Speaker of the House Mike Turzai

A top Pennsylvania Republican lawmaker took time out of his visit to a Catholic elementary school with Education Secretary Betsy DeVos to berate a retired public school teacher, calling her a "special interest" who's part of a "monopoly."

Speaker of the House Mike Turzai on Thursday chastised the school teacher who was protesting the Republican attack on local public schools. Conservatives across the country, emboldened by Trump administration polices spearheaded by DeVos are working to bleed taxpayer funds out of public school and inject them into charter schools, private schools, and religious schools.

"You have to care about each child," Speaker Turzai informed the retired teacher, who was standing with another woman, presumably also a teacher, "not about the monopoly, which is where I think you folks are – you're special interest people."

"You don't really care about the kids," he claimed. "What you care about is a monopoly."

"I'm a little offended from that," one of the teachers responded.

The retired teacher was holding a sign that read: "I Love Public Schools."

The other woman's sign said, "Public Money for Public Schools."

"I have dedicated my life to children. I have sacrificed my time –" she said before Turzai cut her off.

"You have to understand that there's opportunities for each and every child in a variety of different schools, and those that have won a monopoly and are only about special interests and not about the child, need to think twice – and that includes you," Speaker Turzai said. He then walked away, falsely claiming charter schools are not "for profit."