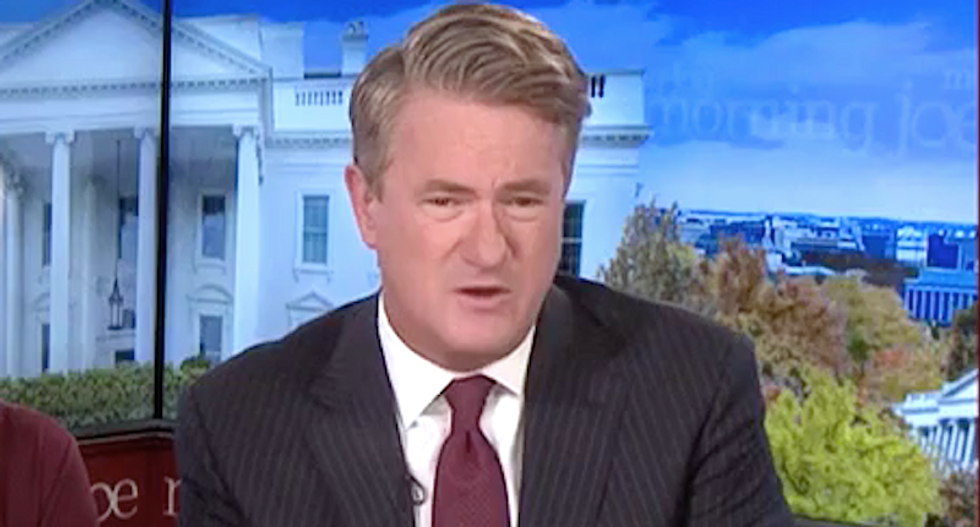 MSNBC's Joe Scarborough explained why it's not hard to understand why public support is growing for the impeachment and removal of President Donald Trump.

A new Washington Post-Schar School poll shows Americans support the House impeachment inquiry, by a 58-38 percent margin, and 49 percent say the House should impeach Trump and call for his removal, compared to just 6 percent who back the inquiry but do not want to see the president removed from office.

The "Morning Joe" host said the Ukraine scandal, Trump's call for China to investigate Joe Biden, and now his baffling decision to abandon the Kurds in Syria, are not nearly as complicated as the Russia investigation by special counsel Robert Mueller.

"He calls Ukraine, and this is a country recently invaded by Russia, he's holding up $391 million in defense money," Scarborough said. "Why? For his campaign's benefit. So he extorts the leader of a democratic ally, Americans can understand that -- misusing the office for his political gain."

"He makes a call to China, somebody that he has said is our enemy, but he calls China and he's talking and what does he do?" Scarborough continued. "He not only says it on TV, he says it in a phone call a couple months back, reportedly, and he says, 'Help my campaign out, I need you to investigate the guy who's ahead of me by 9 points in the poll.' Americans can understand that."

"In a few minutes we're going to show this guy's connections with Turkey, his financial connections with Turkey," he added. "Americans understand that. Why is it that he's nice to countries where gives him the most money? Russia? Why is it that he bends over backwards to help the Saudis out when, what did he say in the campaign? They like my toys, they've given me $150 million."

"Why is it that the Philippines, everybody else is turning on the Philippines because they have a savage leader there who doesn't respect any human rights or norms?" Scaborough said. "Why? He's got hotel property there, and the same thing with Turkey. Why is it every time he gets on the phone call with (Turkey's Recep Tayyip) Erdoğan he gets off and he makes decisions that Americans understand are not in our best interest."

Scarborough said the president's support even seems to be eroding among some of his biggest public boosters.

"Whether you're on Fox News, 'Fox & Friends,' or whether you're on the '700 Club,' Pat Robertson, or are whether you're a guy that goes golfing with Donald Trump and you've completely forsaken everything that you believed in with John McCain with constitutional norms, you're Lindsey Graham," he said, "all of these people understand none of this is in America's best interest."