'Are you a clown school dropout?’ GOP lawmaker ripped to shreds for trying to crash Vindman hearing 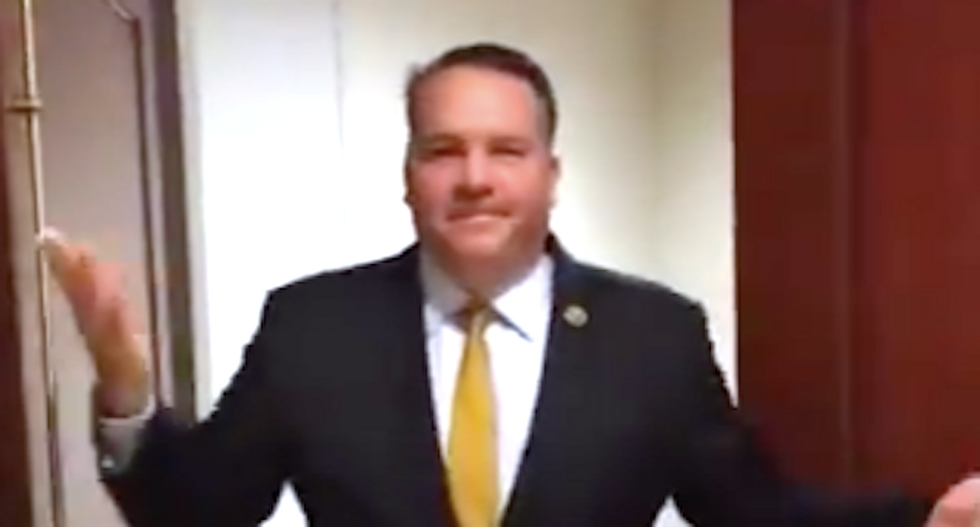 A West Virginia Republican tried again to crash a closed-door impeachment inquiry hearing, and was roundly mocked for whining about his rejection.

Rep. Alex Mooney (R-WV) -- who shared audio of a phone call he made last week inside the Sensitive Compartmented Information Facility (SCIF) during a protest staged with dozens of GOP lawmakers -- attempted to sit in on testimony by Lt. Col. Alexander Vindman before the House Intelligence Committee.

However, Mooney was turned away because he doesn't serve on that committee, which is questioning witnesses as part of an impeachment inquiry into President Donald Trump's efforts to pressure Ukraine to provide campaign dirt against Joe Biden.

Today I was once again denied the opportunity to attend the secret so-called impeachment hearings. I will continue… https://t.co/MmbUOjJb75
— Rep. Alex Mooney (@Rep. Alex Mooney) 1572361811.0

Mooney's political stunt was ridiculed by other Twitter users.

@RepAlexMooney Why don’t you talk to your GOP colleagues who are actually, you know, on the committees? This isn’t hard.
— Ed Greenberger (@Ed Greenberger) 1572362026.0

@RepAlexMooney As my representative, I implore you to work hard and ask @GOPLeader to appoint you to the committee… https://t.co/OSAeta5iNW
— Ted Hogbin (@Ted Hogbin) 1572362186.0

@RepAlexMooney So weird this guy's colleagues didn't think he deserved a spot on the Intelligence Committee.
— Liz Dye (@Liz Dye) 1572365695.0

Former President Donald Trump's effort to keep details of a settlement related to a past nondisclosure agreement lawsuit were dealt a setback on Monday.

Bloomberg News reports that US District Judge Paul Gardephe has ruled that Trump must disclose the amount of money he's paying to former staffer Jessica Denson, who had filed a legal challenge to Trump's mandate that all campaign staffers sign NDAs as a precondition to working for him.