As Zuckerberg defends false Trump ads as free expression, critics say Facebook's assault on 'foundations of Democracy' must be stopped 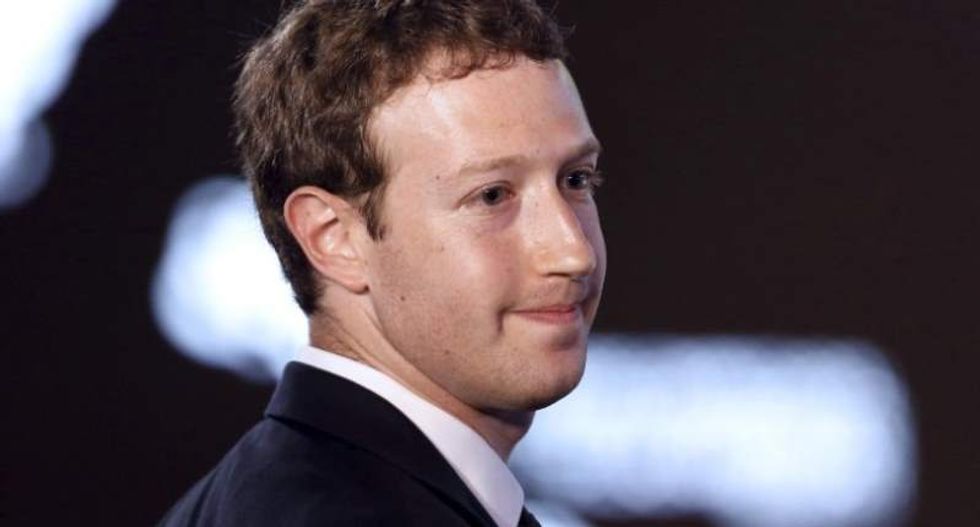 "To save democracy and the free press, we must eliminate Google and Facebook's control over the information commons."

Amid the ongoing debate over Facebook's policy of exempting political advertising from its "misinformation" standards, a "defiant" speech on free expression delivered Thursday by Facebook CEO Mark Zuckerberg has elevated broader concerns about how powerful tech giants are "poisoning the well of our democracy."

The Verge's Silicon Valley editor Casey Newton wrote earlier this month that "Facebook's approach to this problem has been to make political ads public so that researchers, journalists like Legum, and curious citizens can investigate the content of those ads themselves—and then have a free debate over their merits on and off the platform. It's not a perfect solution, but it is a democratic one."

"Hovering around this debate is a larger, unspoken concern about our current moment, which is that there is increasingly little penalty in public life for telling any lie at all," Newton added. "Pressing as that issue is, though, it's unclear what a tech platform ought to do about it."

The national discussion provoked by Facebook's ad policy has led to renewed calls for federal efforts to battle misinformation and the outsize control Big Tech companies exercise on the flow of information to the public. Some advocates suggest legislation requiring reforms at major technology firms and directing money toward improving journalism.

"Advertising revenue that used to go to quality journalism is now captured by big tech intermediaries, and some of that money now goes to dishonest, low-quality, and fraudulent content," Matt Stoller, a fellow at the Open Markets Institute, wrote in an op-ed titled "Tech Companies Are Destroying Democracy and the Free Press" for The New York Times Thursday.

Stoller argued that "the concentration of online advertising revenue in the hands of Google and Facebook," which diverts funds from publishers, and "an ethical breakdown—a natural consequence of advertising financing an information utility like a social network or search engine," has produced a "dysfunctional information ecosystem... characterized by polarization, addiction, and conspiracy theories."

the collapse of journalism and democracy in the face of the internet is not inevitable. To save democracy and the free press, we must eliminate Google and Facebook's control over the information commons. That means decentralizing these markets and splitting information utilities from one another so that search, mapping, YouTube, and other Google subsidiaries are separate companies, and Instagram, WhatsApp, and Facebook once again compete. It also means barring or severely curtailing advertising on any of these platforms. Advertising revenue should once again flow to journalism and art. And people should pay directly for communications services, instead of paying indirectly by forgoing democracy.

"The only real solution to Facebook," wrote Karr, "is one that billions of people don't seem ready to commit to: leaving the social platform altogether. In the interim, we must consider ways to help create its alternative: content-sharing platforms that don't hammer at the foundations of democracy."

Karr highlighted "an ambitious but achievable proposal" he put forth with Free Press president Craig Aaron in February: establishing a federal tax on tech giants' revenues from targeted online ads to create a Public Interest Media Endowment that would fund a resurgence of independent and local journalism.

All of us must think beyond fixing Facebook to a social media solution of, by, and for the people—not one that protects the powerful and spreads their lies. What we accomplish by the end of 2020 will help determine whether the future of our democracy brightens or dims, and whether our media system becomes an agent of civic engagement or alienation. To do this requires a dramatic change in the way online platforms work today.

Silicon Valley is incapable of cleaning up its toxic mess. More democratic media must help improve political participation, deepen discourse, and increase voter turnout. Transparency about political ads is a key element of this shift, but so are efforts to return working journalists to civic-minded beats and limit the damaging effects of disinformation.

As for suggestions that reforms be left in the hands of Silicon Valley firms, Karr wrote that "those naive enough to expect Facebook to do the right thing are ignoring the company's long history of doing the exact opposite."

Warren is a federal legislator who has a record of facing off with Facebook. One of her many 2020 campaign plans is to "break up Big Tech" firms—a proposal Zuckerberg has vowed to "fight" against should she become president.

Facebook representatives, including Zuckerberg himself, have doubled down on the company's political ad policy in response to recent criticism from Democrats Warren and Biden. During his live-streamed speech at Georgetown University Thursday, Zuckerberg said that "whether you like Facebook or not, we need to recognize what is at stake and come together to stand for free expression at this critical moment."

Although it was a broader policy speech, Zuckerberg did specifically address the ad debate:

Political advertising is more transparent on Facebook than anywhere else—we keep all political and issue ads in an archive so everyone can scrutinize them, and no TV or print does that. We don't fact-check political ads. We don't do this to help politicians, but because we think people should be able to see for themselves what politicians are saying. And if content is newsworthy, we also won't take it down even if it would otherwise conflict with many of our standards.

I know many people disagree, but, in general, I don't think it's right for a private company to censor politicians or the news in a democracy. And we're not an outlier here. The other major internet platforms and the vast majority of media also run these same ads.

Warren, in a series of tweets Thursday, reiterated her concerns about Facebook's ad policy and charged that Zuckerberg's speech "shows how little he learned from 2016, and how unprepared Facebook is to handle the 2020 election."

"Here's the thing, Mark. Trump isn't just posting a lie on his own page for his own followers. Facebook is accepting millions of dollars from Trump to run political ads, including ones with misinformation and outright lies. Ads that TV stations won't even run," Warren wrote in an apparent reference to a recent Trump ad CNN rejected. "Facebook is actively helping Trump spread lies and misinformation. Facebook already helped elect Donald Trump once. They might do it again—and profit off of it."

Vanita Gupta, president and CEO of the Leadership Conference on Civil and Human Rights, issued a statement Thursday criticizing Zuckerberg's speech and warning that Facebook's policy "will do irreparable damage to our democracy." As she put it, "While we can all agree that free expression is core to our democracy, fair elections must be as well."

Gupta was also among the multiple civil rights leaders who called out Zuckerberg for his references of Martin Luther King Jr., Frederick Douglass, and movements like #BlackLivesMatter and #MeToo.

"The fact that Zuckerberg would even invoke civil rights icons in remarks that justify his decision to exempt politicians' speech from Facebook's Community Standards underscores his willful refusal to accept how voter suppression has played out, from Jim Crow to now. He is in denial and so is his company," she said. "Indeed, Zuckerberg remains silent on how Facebook will fight intentional misinformation by politicians. This reckless behavior presents a growing threat to our democracy. We urge Facebook to correct course and close this exemption, or at least subject the speech to third-party fact-checking, put up warnings, and require disclosures."

In an op-ed for The Washington Post, president and director-counsel of the NAACP Legal Defense and Educational Fund Sherrilyn Ifill made a similar argument about Zuckerberg invoking key figures and "the struggles of the civil rights movement to defend his company's policy." According to Ifill, "This is a profound misreading of the civil rights movement in America. And a dangerous misunderstanding of the political and digital landscape we now inhabit."

Bernice King, MLK's only surviving daughter, weighed in on Twitter:

In a statement to NBC News late Thursday, a Facebook spokesperson said that "we respect and appreciate the comments made by some of the nation's foremost civil rights leaders... Their perspectives are critically important and we are committed to continuing the ongoing dialogue. Our work is far from over."