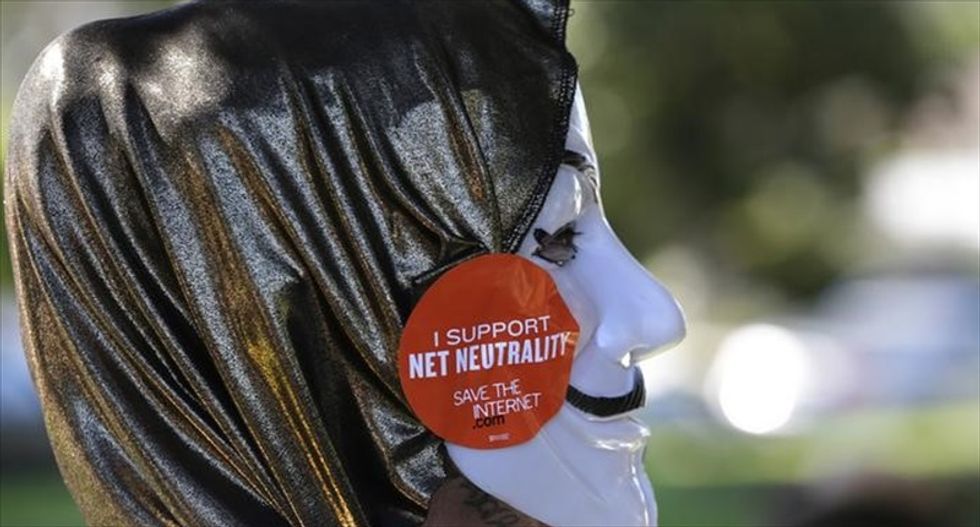 A pro-net neutrality Internet activist attends a rally in the neighborhood where U.S. President Barack Obama attended a fundraiser in Los Angeles, California on July 23, 2014. Photo by Jonathan Alcorn for Reuters.

"Big Cable's lobbyists will use this as an excuse to swarm Washington, D.C. The internet must come together once more to beat back corruption and defend our online freedom."

Digital rights advocates said the public must "be ready to fight like hell" to save the open internet from telecom attacks after a federal appeals court on Tuesday largely upheld the FCC's 2017 repeal of net neutrality.

"Telecom monopolies like AT&T, Comcast, and Verizon are hellbent on destroying net neutrality," Evan Greer, deputy director of the advocacy group Fight for the Future, said in a statement. "Big Cable's lobbyists will use this as an excuse to swarm Washington, D.C. and attempt to ram through bad legislation that would permanently gut open internet protections."

"We can't let that happen," said Greer. "The internet must come together once more to beat back corruption and defend our online freedom."

The D.C. Circuit Court of Appeals said in its 186-page ruling (pdf) Tuesday that the FCC's attempt to bar states from passing stronger net neutrality rules was illegal, a significant victory for California, Washington, and other states that passed strong net neutrality protections in the wake of the FCC's repeal.

"The court rejected the FCC's claims that it can pre-empt state net neutrality laws out of hand," said Aaron. "So we can take this fight to the states to protect internet users."

Aaron added that the current or next Congress "can fix this mess by passing the Save the Internet Act that has already passed the House this year." The bill, as Common Dreams reported, is currently languishing in the Senate as Majority Leader Mitch McConnell (R-Ky.) refuses to bring it to the floor for a vote.

Matt Wood, vice president of policy and general counsel at Free Press, said the court's decision "underscores the pressing need for the Senate to pass the Save the Internet Act."

"It opens the door for a future FCC to go back to the right rules," Wood added, "and for states to fill the vacuum with state-based net neutrality laws."

Wood responded that the only people who will join Pai on his victory lap are "his small circle of advisers and the lobbyists that give him his marching orders."

"The only place in the country where we don't see overwhelming bipartisan support for real net neutrality rules," said Wood, "is in a small and shrinking bubble inside the Beltway that's populated chiefly by Republican congressional leadership and the failed FCC chairman they've wrongly backed."

"People in the rest of the United States get it," said Wood. "More than 85 percent of voters—including 82 percent of Republicans and 90 percent of Democrats—support the rules that Pai struck down."