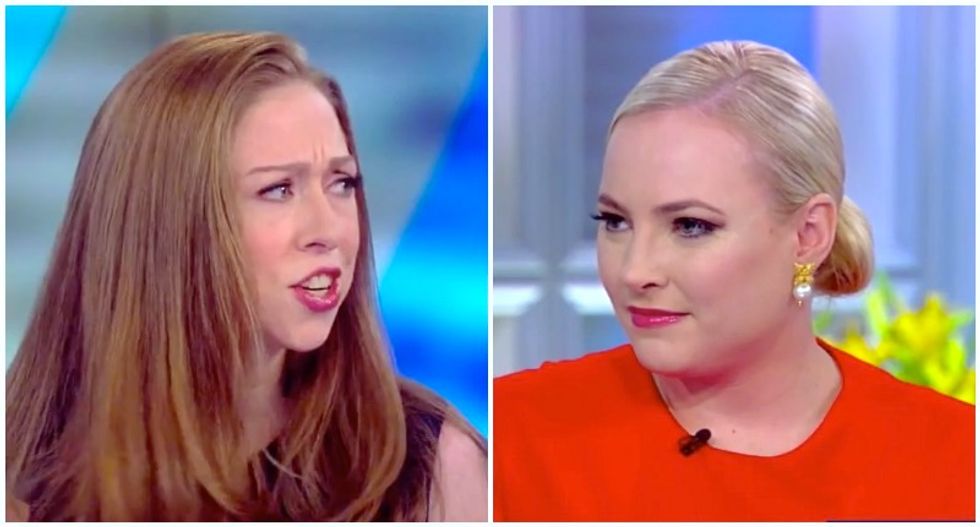 Chelsea Clinton dismissed the rumors that she's considering a run for Congress -- while taking a subtle swipe at fellow political daughter Meghan McCain.

Clinton filled in Wednesday as co-host on "The View" for Joy Behar, who's been out all week, and was asked right away to comment on rumors that she might run for the House seat vacated by the retiring Rep. Nita Lowey (D-NY).

"I understand why people are asking, and someone has asked me some version of this question for literally as long as I can remember," Clinton said.

Clinton looked at co-host Abby Huntsman, whose father Jon Huntsman served as Utah governor, ran for the Republican presidential nomination and then served until recently as the U.S. ambassador to Russia.

"Abby's nodding," she said. "One of my earliest memories is being 3 or 4, and someone asking, are you going to run for governor of Arkansas one day?"

Clinton's father Bill Clinton served as governor at that time, before going on to serve two terms as president, and her mother has served in the U.S. Senate and as secretary of state before winning the 2016 presidential nomination.

"I share that because it's a question that shouldn't just be asked of someone whose last name is Clinton or Huntsman," Clinton said, as McCain looked on from the next seat.

McCain's father John McCain served two terms in the House before going on to serve in the Senate from 1987 until his death last year.

"Ask kids, young people, women, and I hope that if the answer to that question is yes, I'm considering it," Clinton said. "You go to other resources that will help you do that."

Clinton wouldn't rule out entering politics at some point, but not now.

"I don't know, but right now the answer is no," she said.