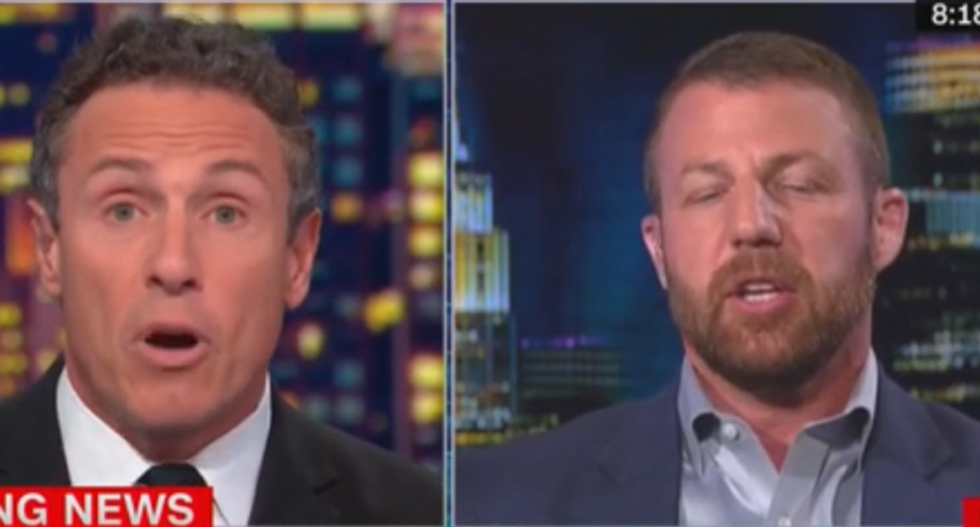 On Thursday's edition of CNN's "Cuomo Prime Time," anchor Chris Cuomo clashed with Rep. Markwayne Mullin (R-OK) as he tried to excuse President Donald Trump's attempt to strong-arm foreign powers into getting dirt on Vice President Joe Biden — and flat-out saying he didn't think that was a problem.

"So to summarize what I'm sure you already know, Congressman, but we had this former special envoy Kurt Volker come out today and basically express, according to the reports, that there were a number of people involved with the diplomatic efforts in Ukraine concerned about what the president had done in that phone call and taking steps to try to tamp it down because they thought it was wrong," said Cuomo. "Are you at all responsive to that?"

"No. I read the transcript. There's nothing inside the transcript that's — that was wrong," insisted Mullin. "He simply said hey, there's some people, there's a lot of people in fact that want to know the truth. Did Biden interfere with your guys in an investigation? What happened with Hunter Biden? ... It was a conversation between two leaders and there's nothing impeachable. There's no high crime. There's no misdemeanor. It was just hey, let's get to the bottom of this and by the way, would you speak to our A.G. and Rudy Giuliani."

"So let's go through it a little bit, if you would," said Cuomo. "We know it's not a verbatim transcript. It's about 2,000 words of a 30-minute call, but it's the best we're going to get at this point. It wasn't recorded. So when you look at it, the idea of the president being asked for military assistance, following up the request by asking for a favor which includes working with his personal attorney to take a look at his political opponent—"

"That didn't happen during that transcript," said Mullin.

"What we read, it did not say anything about the — read the transcript. Did it say anything in there that it was — that even had the conversation about military aid? It was nowhere in that transcript."

"You're talking about the 200 or 400 million. I'm not talking about that," said Cuomo. "When they said, 'We want the Javelins, we'd like to do more with the Javelins,' he, our president, followed by saying 'Do me a favor' and then went into the discussion about Giuliani and the Bidens. And simple logic suggests that that was a conditional. And in fact, we have reporting now and Mr. Volker reportedly testified today the Ukrainians were confused about what it meant. And we know that there was a statement drafted by U.S. Officials to codify that the Ukraine president would do those investigations."

"Chris, when you read the transcript, once again — when you read the transcript, it's very, very clear," whined Mullin. "The conversations were completely separate. And they went from congratulating each other to say hey, thank you for being a good friend, we appreciate it, hey, Mr. President, we just follow your blueprint. I'd like you to do me a favor — this is President Trump. I would like — yeah, I would like you to do me a favor. I hear your prosecutor's a good prosecutor but he wasn't allowed to do his job. Can you look into something because it's important to a lot of people."

"The idea that the prosecutor wasn't allowed to do his job, as you know, is a flawed premise," said Cuomo. "He was actually removed for not doing his job of looking into corruption. That's why the United States and a number of other international entities including the Ukraine parliament wanted the guy out. But even the simple suggestion that 'You should look at my political opponent' as the president of the United States to the president of Ukraine, how can you think that's okay?"

"Is this not — Chris, is this not something that the president — that the vice president was going around and bragging at the time, is it not important to find out actually what happened?" said Mullin.

"We know what happened," said Cuomo.

"He was a private citizen," said Cuomo. "If you care about that kind of conflict ... I don't understand how this president or you can claim to be bothered by that and not bothered by the fact that his daughter [Ivanka], who represents the United States of America, gets intellectual property grants from China at the same time she's representing the United States and sitting down with the Chinese president. How can Hunter Biden bother you and that doesn't?"

"Their business was well established before the president became President Trump," said Mullin.

"How does that make it okay? She's doing business from the White House," said Cuomo. He then pointed out that if Mullin thinks Biden shouldn't be allowed to run for president, he must also think Trump should resign by the same logic.

"If you do something illegal," said Mullin mulishly.

"What Hunter Biden did wasn't illegal!" said Cuomo. "So if what he did was improper, then what Ivanka is doing is improper, the president should resign, Joe Biden shouldn't run. Get rid of all of it."