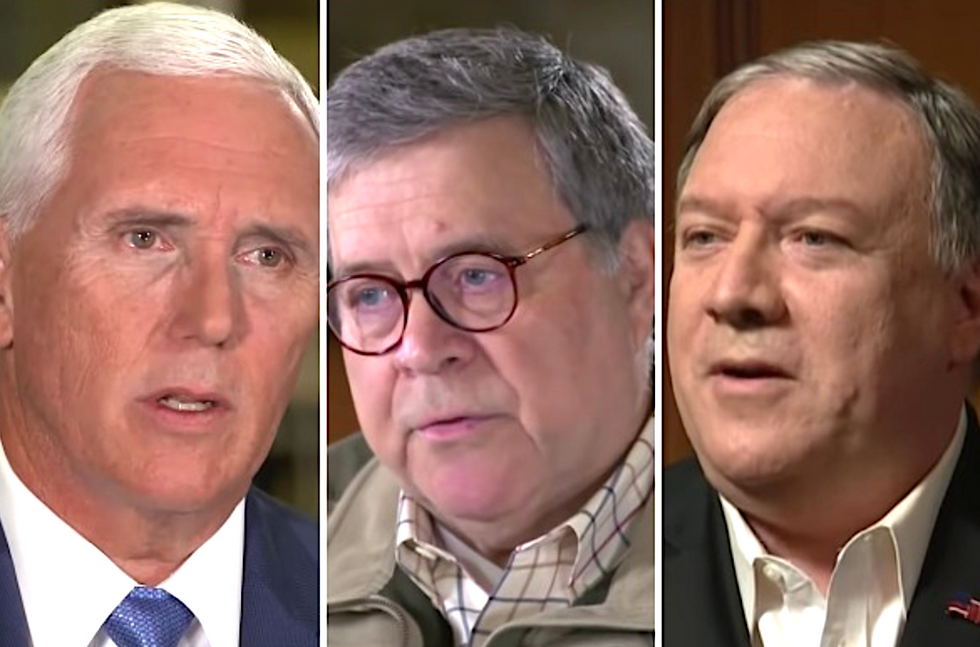 In an op-ed for the Washington Post this Wednesday, conservative columnist Max Boot argued that if President Trump is impeached, three of his senior officials, namely Vice President Pence, Secretary of State Mike Pompeo, and Attorney General William P. Barr, should be impeached too.

According to Boot, the trio "could have tried to dissuade the president from misusing his office for personal gain, but there is no evidence that they ever attempted to do so."

Boot names Pence as Trump's "most prominent proxy" in his alleged attempt to pressure Ukraine's president to investigate Joe Biden and his son.

"Trump told Pence not to attend Zelensky’s inauguration in May so as to turn the screws on the Ukrainian president," Boot writes. "When they finally met in Warsaw on Sept. 1, Pence again pressured Zelensky to take action on “corruption,” a code word for investigating Biden and the former vice president’s son Hunter."

Boot goes on to call Pompeo the "worst secretary of state in history," saying that he was "fully aware" of Trump's unlawfulness and did nothing to stop him. "Instead, he has endorsed the crazy conspiracy theory that it was the Ukrainians, not the Russians, who interfered in the 2016 election," writes Boot, adding that Pompeo is now "leading Trump's coverup."

But Barr is the worst of them all, starting with his willful misleading of the American public regarding Robert Mueller's final report from the Russia investigation, then his refusal to investigate Trump's call with Ukrainian President Volodymyr Zelensky, followed by his "flying around the world to pressure allies to cooperate with his politically motivated probe designed to show that the investigation of Trump’s ties to Russia was actually a “witch hunt” by the so-called deep state — just as Trump claims."

Boot writes that impeaching the three would be "an unneeded distraction from the necessary impeachment of their boss," but that doesn't mean they don't deserve it.

"They have even failed Trump by not acting to save the worst person ever to occupy the White House from his worst instincts."