DOJ ‘utterly confused and angry’ at Mulvaney for his comments about suspending Ukraine aid: Fox News 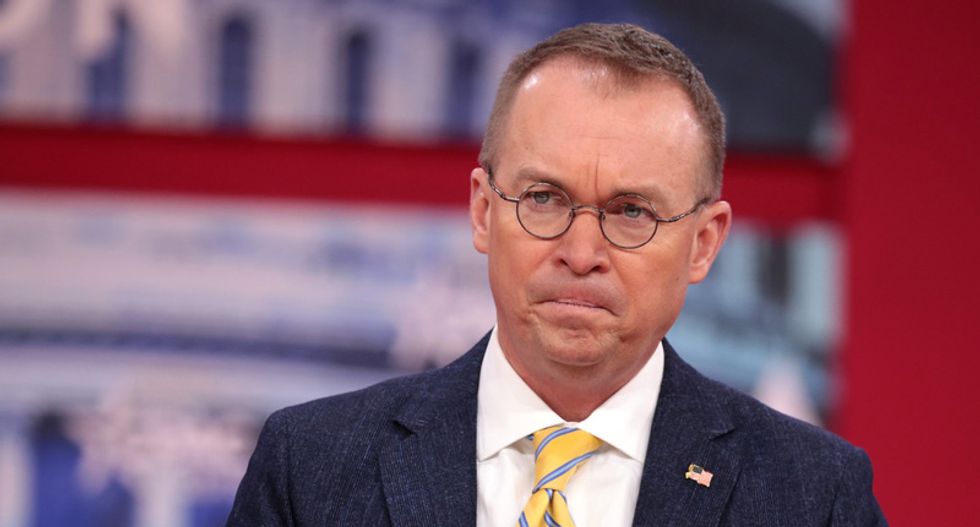 Fox News had a difficult time trying to understand chief of staff Mick Mulvaney's admission that the president held up Ukraine aid for political reasons. According to Fox, the Department of Justice is "utterly confused and angry" that Mulvaney outed the president for using American dollars to bribe Ukraine for 2020 election assistance.

During a press briefing, Mulvaney, who also serves as director of the Office of Management and Budget, confessed that Trump told him Ukraine corruption issues also had to do with the DNC server.

"That he also mentioned to me that the corruption related to the DNC server, absolutely," said Mulvaney. "No question about it. That’s it and that’s why we held up the money."

The president believes a conspiracy theory that somehow Hillary Clinton's email server is in Ukraine.

Fox News chief intelligence correspondent Catherine Herridge said that the comment has sparked "strong and quick reaction" from officials at the Justice Department.

"They have been sending out guidance to us over the last 15 minutes," she said. "We are told that the Justice Department was 'utterly confused and angry' about Mulvaney’s comments that linked the suspension of foreign aid with the cooperation from Ukraine into the Justice Department investigation that’s being led by the U.S. Attorney in Connecticut, John Durham."

Durham is the person tasked with probing the beginning of the Russia investigation and whether procedures were followed.

Meanwhile, EU Ambassador Gordon Sondland was testifying on Capitol Hill that he too was told that the president's personal lawyer, Rudy Giuliani, would be the point person on anything having to do with Ukraine. It was only later that Sondland said he learned that it also included investigations into the former vice president and his family.

"Our view was that the men and women of the State Department, not the president's personal lawyer should take responsibility for all aspects of U.S. foreign policy towards Ukraine," Sondland testified in his opening statement.