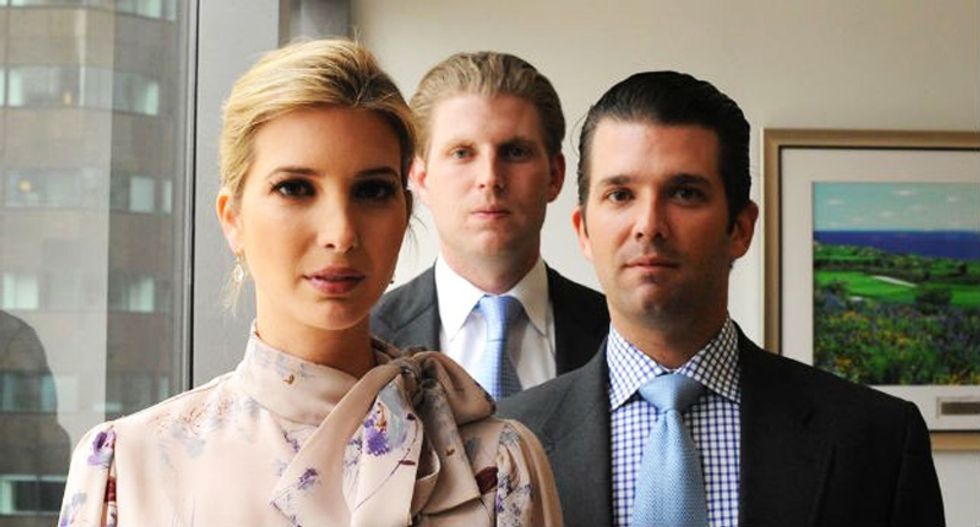 On MSNBC's "AM Joy," former George W. Bush speechwriter David Frum tore into President Donald Trump's children, noting that they are guilty of improprieties leaps and bounds ahead of anything that Hunter Biden has even been accused of.

"You have Ivanka Trump getting Chinese trademarks for voting machines, April 2017, three new trademarks for Ms. Trump the day she met China's president, Xi Jinping," said host Joy Reid. "You have Ivanka Trump getting sixteen new trademarks, including these voting machines, you've Donald Trump Jr. in Indonesia kicking off the sale of luxury condos. You've got all of these wonderful things Donald Trump is selling, all sorts of businesses all over the world that he's selling for money, money, money. And his kids are involved in all of it. What is happening here?"

"Well, when you see poor Eric and poor Don Jr., you realize there are bivalves with more self-awareness than the Trump children," said Frum. "The biggest Trump family scandal, Trump next-generation scandal is one that didn't quite come off. In the period of the transition, between the election and inauguration, Jared Kushner met with senior officers of the Anbang financial concern in China, with a view to get hundreds of millions of dollars to rescue his desperately failing project on Fifth Avenue. That was exposed in time by The New York Times, and so the deal did not happen. But this was not a $50,000 payday. This was not a $50 million payday. This was a multiple hundreds of millions of dollars payday."

"No one has to defend Hunter Biden," added Frum. "I think Hunter Biden should be out there with a statement saying, I made mistakes, and I undertake now — I'm taking a job at — I'm going to go work in Kansas City, do trust in estates work or something that he's not going to in any way embarrass his father. Presidential families should behave themselves in more circumspect way. But the Trump family is so far and away the most corrupt in American presidential history that you really can't think of who's in second place."