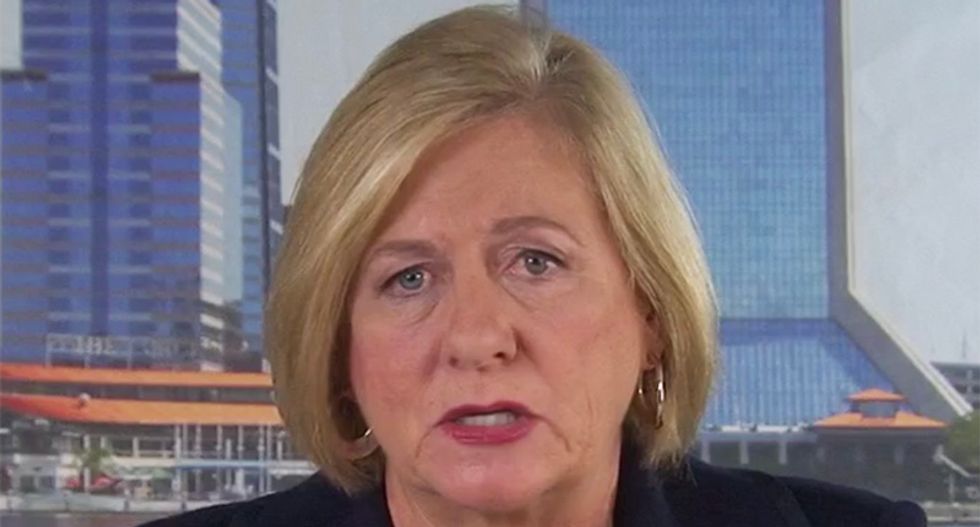 Appearing on MSNBC on Saturday morning, a former career diplomat who served as the U.S. ambassador to the United Nations said people can expect a flood of resignations within the State Department that has become engulfed in Donald Trump's Ukraine scandal.

Speaking with host Jo Ling Kent just moments after the network broadcast remarks from Secretary of State Mike Pompeo speaking overseas about the Ukraine investigation, Ambassador Nancy Soderberg said she personally saw evidence of a quid quo pro between the president and Ukraine officials, and that the scandal is not going to go away.

"I think Secretary Pompeo is not going to be able to hold up that narrative as this chaos around him swirls with new text messages and Secretary [Rick] Perry resigning," Soderberg remarked. "It's just an unbelievable cascade of events. and I think what's going to happen here is it will be clear that the president and Secretary Pompeo, [Rudy] Giuliani, the other lawyers freelancing in Europe on behalf of the president, did actually put a quid pro quo on the table. And that is a fact that will emerge through testimonies, through these text messages that have come out."

"I think that the question for Secretary Pompeo is what was his role in holding up the aid tied Ukraine?" she continued. "It was not about creating space and a good relationship with Ukrainians. It was to try to make sure that the government would do the president's bidding and that is going to come out and I think people around the president need to stop with these false narratives."

Addressing turmoil at the State Department, Soderberg said the public can expect to see a flood of resignations coming saying, "It's hard to be Secretary of State. It's hard to get the building to do what you want and to shift priorities so that's not unusual."

"I think what is unusual and why you're seeing the whistle-blowers and the leaked text messages and you're going to see more and more resignations, political appointees doing the president's bidding in Europe," she added.