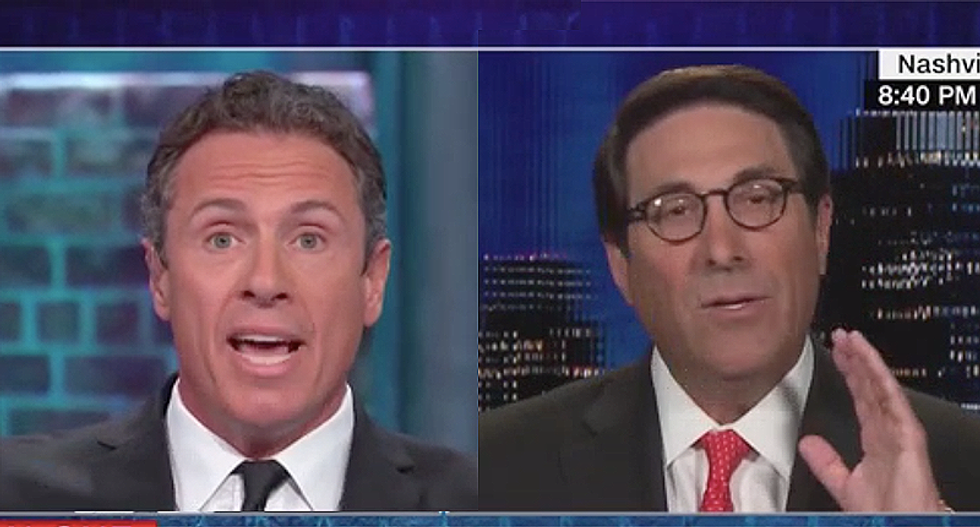 "Help me understand this," said Cuomo. "How is the district saying 'I reject all of your arguments, turn over the taxes' a win?"

"It’s a win because the U.S. Court of appeals for the Second Circuit, literally within about ten minutes of us filing the application," said Sekulow, who promptly raised his voice and said, "I want to say something here. There are 5,000 D.A. and assistant district attorneys throughout the United States. Can you imagine if the president of the United States was subject to individual investigations by D.A.s for whatever reason they so choose?"

"Yes," said Cuomo. "We know all of this grow out of an Office of Legal Counsel’s opinion. You know the judge rejected the idea the president of the United States could be immune from all criminal process pending his term. Just to be clear, getting a stay is not a statement by the appellate court that you’re going to win. Yes, this is novel and arguably unique issues because it is the president, it hasn’t been tested before and we’re seeing something different. That’s why you got the stay. You didn’t get the stay because it’s a win."

"Hold it," snapped Sekulow. "There’s multiple reasons why you get stays. Including is there a likelihood of success on the merits, is there irreparable harm, is the decision raising or opinions or issues raised in the petition for a stay unique? The district court judge wasn’t going to give us another ten minutes. Which I think is ridiculous."

"Let’s go slow," said Cuomo. "Remember, you’ve got this highly developed legal mind. For the audience, they’re not mostly lawyers. Show us the taxes, the Manhattan D.A. says, show me the taxes, I’m looking at a state potential charge for how these women were paid by your lawyer, Michael Cohen, I want the taxes. This is about turning over your taxes, not just throwing you in jail."

"Let me quote what the U.S. District Court judge did in California when the state of California passed a piece of legislation that said to be on the primary ballot you had to provide five years of your tax returns if you’re running for president," said Sekulow heatedly. "What did the court there say? It’s not constitutional. Why? Violated freedom of association and the presidential qualification clause of the United States Constitution."

"Hold on, hold on. Jay, Jay, the court — its major part of the holding was we don’t like the slippery slope of states being able to create their own tailored qualifications for national office," said Cuomo.

"Because it violates the Constitution!"

"Because the Constitution doesn’t require it, Chris!"

"But that doesn’t mean the Constitution says you shouldn’t," shot back Cuomo.

Later, the topic turned to the question of Trump soliciting campaign dirt from foreign governments — which Sekulow emphatically shouted was not an impeachable offense.

"Let me ask you this. What is the standard of an impeachable offense to you, counselor?" asked Cuomo.

"What does that mean?"

"Such a gross abuse of office that you use the State Department, the White House, and the Department of Justice to try to secure relief in your election by finding dirt on an opponent that Ukraine had to deliver or risk not getting valuable aid to fight off the Russians," said Cuomo.

"That's very interesting except it's not true. So that's not what the transcript says," snapped Sekulow.

"Which part of it?" said Cuomo.

"Why don't you actually read the transcript," said Sekulow. "I'd like someone to read the actual transcript."

Sekulow continued to rage. "This is a farce, Chris. It's political theater."

"This is the president of the United States," said Cuomo. "I shouldn't have to beg you for transparency. You should offer it up."