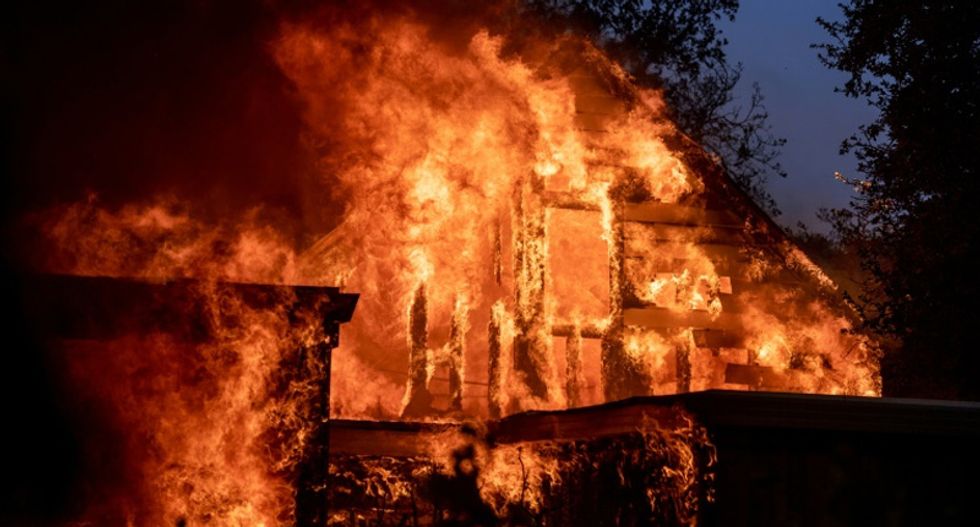 A home is engulfed in flames as the Kincade fire continues in Healdsburg, California. (AFP / Josh Edelson)

Nearly 200,000 people were ordered to evacuate their homes and two million were without power Sunday as wildfires, fanned by howling winds, ripped through northern California, prompting Gov. Gavin Newsom to declare a statewide emergency.

Horrifying video footage and photos of the blazes circulated on social media Sunday as environmentalists said the fires are one of the devastating consequences of the human-caused climate crisis.

"The forces we've unleashed are beyond terrifying," tweeted 350.org founder Bill McKibben in response to a photo showing a fire that broke out in the city of Vallejo around the Carquinez Bridge, shrouding it in smoke and briefly shutting down traffic.

Responding to the same photo, environmentalist and author Naomi Klein tweeted, "My lord."

According to the San Francisco Chronicle, more than a dozen fires burned across California as of Sunday, with the Kincade fire in Sonoma County causing the most destruction. The Kincade blaze has burned nearly 55,000 acres and destroyed dozens of structures.

"More than 3,400 firefighters and other personnel battled the Kincade Fire," the Chronicle reported. "A force amassed outside Windsor to try to keep the flames from roaring over Highway 101, possibly setting off a hellish rampage that could reach the Pacific Ocean."

Carol Pajala, a 67-year-old Santa Rosa resident who was forced to flee her home, described the scene as "apocalyptic," and video footage posted online bolstered that description:

Newsom said Sunday that the winds fueling fires across the state are "unprecedented" and announced he is "deploying every resource available" to combat the blazes.

"It is critical that people in evacuation zones heed the warnings from officials and first responders, and have the local and state resources they need as we fight these fires," Newsom said.

On Twitter, Varshini Prakash, co-founder and executive director of the youth-led Sunrise Movement, said the fires and the severe damage they have caused must be met with urgent and nationwide climate action.

"My stomach is in knots," said Prakash. "Our rage as a nation has to burn as fiercely as every fire we witness—for the retiree who's lost their entire life savings, for the family forced to evacuate from a home they may never come back to, for the child suffocating in smoke miles away."

"Wishing all my CA family safety in the midst of this fire," Prakash added. "But more than that, I'm sending you a commitment to fight every day so your homes, families, and communities won't have to face this worsening hell moving forward."