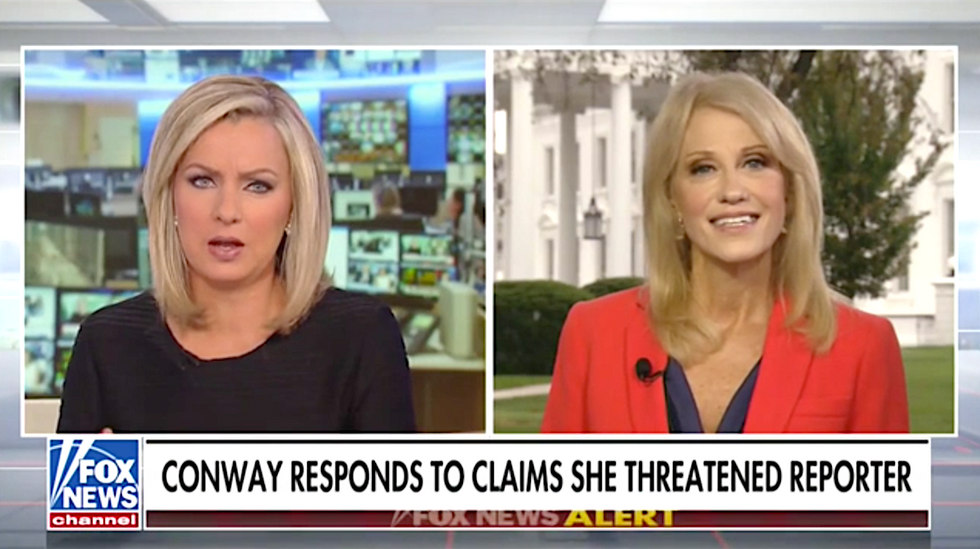 On Fox News this morning, counselor to the President Kellyanne Conway got some heated questioning from anchor Sandra Smith over a recent news report that she threatened to investigate a reporter's personal life for writing about her anti-Trump husband, George Conway.

At the outset of the segment, Smith asked Conway about the "heated clash" she had with Washington Examiner reporter Caitlin Yilek.

"Did that happen, Kellyanne?" Smith asked. "Did you threaten her? Bully her? Abuse her?"

"No, of course not," Conway replied. "What I said is there for everybody to listen to, and a lot of reporters, particularly old school reporters, have read it and contacted me and they have a very different opinion."

"Everything I said in that phone call I’ve said publicly before," she continued. "Every single thing. ... What I asked this reporter is, why do you call yourself a breaking news reporter if what you wrote wasn’t breaking news and wasn’t even reporting? ... You're derivatively reporting what somebody else wrote, Bloomberg, which the President denounced in a tweet, debunked in a tweet, and you're lazily covering somebody’s tweets and something that happened seven months ago, so I was asking her a question."

When Smith asked Conway if she regretted anything about how she handled the situation, she dodged the question.