From Minnesota to Michigan, Trump aims to turn scandal into reelection fuel 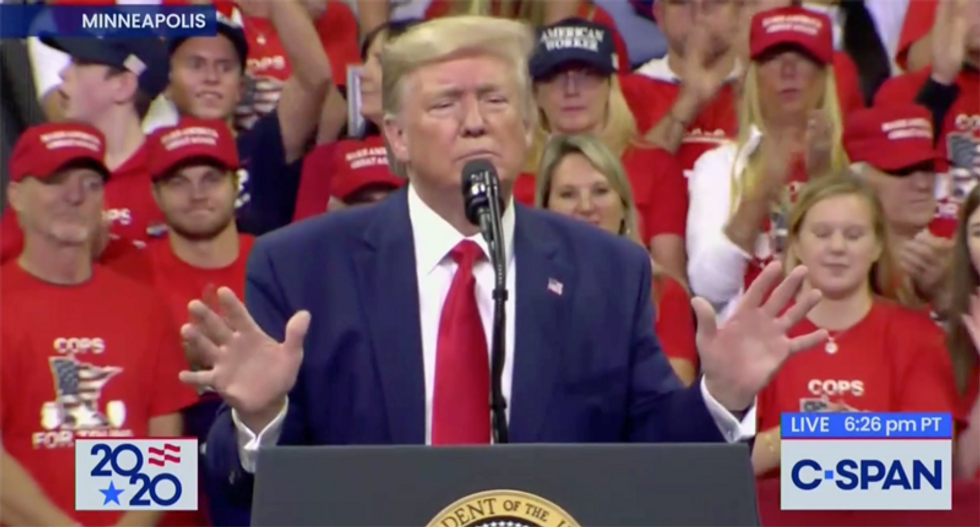 As impeachment pressure mounted on Donald Trump, the president left Washington for the second day in a row Friday to rally hardcore supporters in a bid to turn the scandal into fuel for his 2020 reelection.

Framing himself as the victim of a plot between "corrupt Democrat politicians" and the "fake news media," Trump galvanized supporters at a rally in Lake Charles, Louisiana.

In provocative comments to an enthused base Trump insisted his Democratic rivals -- who are leading the investigation against him in the House -- were "pursuing an illegal, unconstitutional, bullshit impeachment."

Polls show growing public support for the probe into Trump's request for Ukraine to push a corruption case against one of his main Democratic opponents in the 2020 election, Joe Biden.

He is only the fourth US president to face an impeachment probe but after an initially stumbling response the Republican has hit on a strategy of trying to transform the threat into a boost.

Trump attacked House Speaker Nancy Pelosi with particular gusto, telling the crowd her support for the impeachment investigation was evidence of disdain for the United States: "I used to think she loved the country. She hates the country," he said.

Turning his attention to next year's election, Trump said he was convinced he would win in 2020, no matter what.

AFP / SAUL LOEB Trump said at the Louisiana rally he was convinced he would win in 2020, no matter what

Trump's Louisiana rally comes after he barnstormed a gathering in Minneapolis, Minnesota on Thursday, vowing a "backlash" against Democrats.

And in 2020 this will "produce a backlash at the ballot box the likes of which they have never ever seen before."

Back in Washington, former ambassador to Ukraine Marie Yovanovitch, who was fired by Trump, testified before three House committees on Friday, despite White House attempts to stop witnesses from appearing before congressional investigators.

She told legislators that she was forced from her job as a result of "false claims," according to The New York Times.

There was possibly worrying news for Trump as troubles mounted for his colorful, but controversial personal attorney Rudy Giuliani -- a central figure in the administration's murky contacts with Ukraine.

Congressional investigators see Giuliani as Trump's point man in a campaign to extract dirt on Biden from the Ukrainians. On Wednesday, two of the lawyer's clients were arrested in a campaign finance violation case involving foreign money.

Asked Friday if Giuliani continued to be his lawyer, Trump gave a less than convincing answer.

"I don't know," he said. "He's a very good attorney and he has been my attorney."

Democrats who have accused Trump of abusing his office throughout his first term believe they have finally cornered the president with the impeachment probe.

Trump was shown in the rough transcript of a phone call summary issued by the White House to have pressed new Ukrainian President Volodymr Zelensky to open a corruption probe of Biden and his son.

The president has pushed back, refusing to allow anyone in his administration to cooperate with the impeachment inquiry.

Public support for impeachment, though, is increasing. A poll from Fox News -- a channel favored by US conservatives -- shows 51 percent back his removal from office.

With control of the lower house of Congress, Democrats are likely to vote to impeach in the coming months, even if few believe the Republican-led Senate will actually convict Trump and force him from power.

Trump has however faced a rare party rebellion this week over his abrupt decision to remove US troops from the Turkish-Syrian border, effectively abandoning Kurds who had fought alongside the United States in Syria to a Turkish assault.