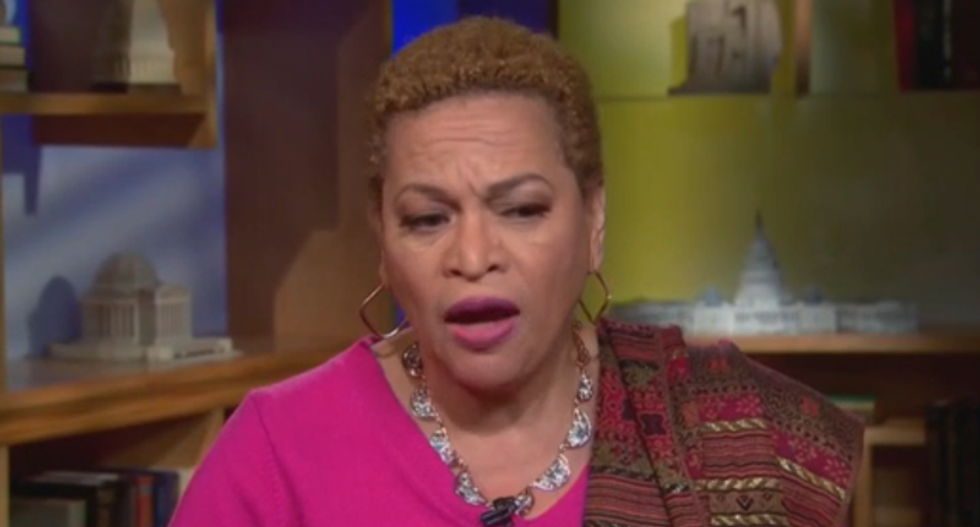 President Donald Trump has faced criticism over an event he was to hold on criminal justice reform at Benedict College in Columbia, South Carolina, a historically black school, just after referring to his impeachment as a "lynching."

On Saturday's edition of MSNBC's "AM Joy," economist and author Julianne Malveaux pulled no punches while blasting him for using the institution as a "prop" to excuse his own racism.

"Talk to us for a moment about the significance of how he has used race in this country and why he is now being honored at this university," said anchor Ayman Mohyeldin.

"Well, first of all, the university did not honor him," said Malveaux. "This organization honored him, whatever they are — the Second Step Organization, that's looking at criminal justice. So, the university itself did not honor him. So that's really important to note. The other thing that's important to note is that students were sequestered in their dormitories. It's so outrageous. So, you had seven students attend. Only ten were invited. But the rest of the student body could not leave the dormitory. They were sitting in the dormitory, even through the lunch hour, and they gave them snacks as opposed to a lunch. If I were a parent, I would be suing."

"Now, I will say that, having been a college president myself, college presidents always stuck between a rock and a hard place," continued Malveaux. "It'd be hard to say, no, the president of the United States cannot come to my campus, but the campus did not invite him. This organization invited him. They first leased the college or said, can we have this presidential thing on criminal justice on your campus, and later, after the fact, they brought 45 on. He has used black people consistently as props. He has used HBCUs as props. Remember two years ago, when he had about 70 present in the Oval Office. It was a horrible picture. And some of my friends were there, but they said, how do you say no?"

"Understand, this South Carolina meeting at Benedict, they flew black Republicans from all over the country so that they had a full house, but they didn't have students there," said Malveaux.

"So, basically, Benedict College allowed itself to be used as a backdrop, but that's just like the folks who show up — you know, this was a college-based Trump rally. Really, he's had a rally on campus and he used the campus."

"He always talks about low black unemployment rates, but the fact is that the black unemployment rate is twice that of whites, so he's normalizing inequality," she added. "He's constantly talked about what he has done, but there was a piece of legislation that provided permanent extension of HBCU funds, it got through the House and he did not use his influence to get it through the Senate, so it died. So, he basically just tells lies, big lies, and big, big lies."

President Vladimir Putin is set to preside Thursday over commemorations to mark the 80th anniversary of the Soviet victory at the Battle of Stalingrad, one of the bloodiest in World War II.

The high-profile celebrations in the southern city of Volgograd come as the Kremlin is drumming up support for its offensive in Ukraine, launched nearly a year ago to "de-Nazify" Ukraine, whose soldiers fought alongside Russia against Nazi Germany.

When Nick Hewlett, head of a London school, was told about controversial online influencer Andrew Tate by a parent, he had never heard the name.

Yet he soon found out that his students were familiar with all of Tate's misogynist posts on social media.

Alejandro Serrano, Maia Spoto And María Méndez, The Texas Tribune
Hundreds of thousands of businesses and households across Central and East Texas lost power for much of Wednesday, as utility crews scrambled to fix power lines downed by freezing rain and fallen trees.

At one point, more than half of those affected were served by Austin Energy, which warned customers Wednesday evening that the outages could extend until 6 p.m. Friday. The outages come as residents experience another night of near-freezing temperatures and another day of closed college campuses, public schools and a paused Legislature.

In the Dallas-Fort Worth area, roads were glazed in ice — refrozen in Wednesday’s frigid temperatures after some of it had melted. Already treacherous driving conditions were expected to worsen with more freezing rain expected through Thursday afternoon.