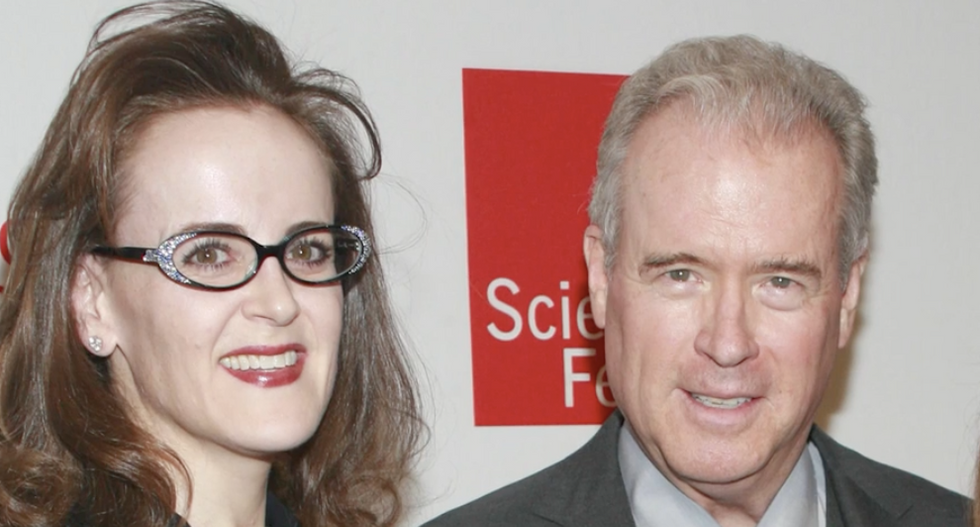 President Donald Trump's obsession with Ukraine and Joe Biden has a bizarre backstory that was blown open on Wednesday in a bombshell report by Joshua Green for Bloomberg.

"The irony of President Trump’s sudden impeachment peril is that it’s the unintended result of an effort to help him: a political hit job aimed at a likely opponent (Joe Biden) and funded by a major right-wing donor (Rebekah Mercer) that Trump and his lawyer (Rudy Giuliani) impatiently hijacked, with consequences that could turn out to be disastrous for them," Bloomberg reported.

Green is the author of the bestselling 2017 book Devil's Bargain: Steve Bannon, Donald Trump, and the Storming of the Presidency.

"To understand how Trump wound up the target of a House impeachment inquiry, it’s first necessary to understand why he was so obsessed with finding dirt on Biden that he pressured Ukraine’s president in a July 25th phone call to 'do us a favor' and investigate Biden and his son, Hunter," Green explained. "The notion that Hunter Biden and his father could be complicit in Ukrainian corruption was first aired in a 2018 book, Secret Empires: How the American Political Class Hides Corruption and Enriches Family and Friends, by conservative author Peter Schweizer.

Schweizer is an editor at the alt-right publication Breitbart News, which had been led by Steve Bannon. He is also the president of the Government Accountability Institute (GAI), which is chaired by Rebekah Mercer, who is also a major funder of the group.

"In a book I wrote about Trump and Steve Bannon, I described how Schweizer and Bannon, GAI’s founding chairman, deployed a staff of lawyers, investigators, and forensic data scientists to scour public records, corporate filings, and the dark web to compile damning evidence that Hillary and Bill Clinton behaved unethically by associating with unsavory, favor-seeking foreign donors through their work with the Clinton Foundation," he explained. "Bannon, the project’s mastermind, had a specific goal in mind. He wasn’t interested in firing up conservatives, who already despised the Clintons. He wanted GAI’s findings presented in non-partisan fashion to independents and Democrats who were considering supporting Hillary Clinton’s 2016 presidential bid."

The 2016 election proved the model.

"As Bannon had intended, the whiff of corruption attached itself to Hillary and became a major theme of the media’s coverage, poisoning her image," Green explained. "Clinton’s subsequent loss in the 2016 election was proof of concept: You could spot a Democratic frontrunner years out and tarnish that person badly enough to ruin their candidacy. So Schweizer and GAI sought to repeat the trick."

The attacks against Biden weren't expanding beyond the far-right media ecosystem, but that's where the president gets his news.

"By this past spring, it was clear the Biden attack was stuck in the conservative ecosystem. And here’s where Trump enters the story—and inadvertently kicks off the whole impeachment saga: Trump may be the single most devoted consumer of conservative media, absorbing hours of it each day. He was mainlining the Biden coverage as part of his daily media diet," Green reported. "What differentiates Trump from other power-consumers of conservative media is that he’s the president and was willing to use his governmental powers to attack a political rival. Impatient to advance a story he believed would damage Biden, Trump tapped Giuliani, who told The New York Times in May that he was going to Kiev, the Ukrainian capital, to push the new government to investigate the Bidens."

"The collective effort to impugn Biden doesn’t appear to have sent him into a tailspin, at least not yet," he reported. "But there’s no question the anti-Biden effort has boomeranged on Trump, who is suddenly under siege from the Democrats’ fast-moving impeachment inquiry. Giuliani has been subpoenaed by House investigators. So has Secretary of State Mike Pompeo, who admitted this morning he was on Trump’s call with Zelenskiy. Kurt Volker, the former special envoy to Ukraine who quit on Friday, will testify in the House impeachment inquiry on Thursday, while Marie Yovanovitch, the former U.S. ambassador to Ukraine who was abruptly ousted in May, will sit for a joint House deposition next week."

Prime Minister Liz Truss pledged on Wednesday to steer Britain through "stormy days" and transform its economy, fighting to restore her authority over a party in revolt after a chaotic first month in office.''

Addressing Conservative lawmakers and members at an annual conference overshadowed by internal bickering and confusion over policy, Truss said the party needed to unite to kick-start stagnant growth and tackle the many problems facing Britain.

On Wednesday morning CNN reported that senior members of the Republican Party are taking a pause on what to do about Herschel Walker as the scandal over his reportedly paying for a former girlfriend's abortion continues to grow.

Speaking with "New Day" host Brianna Keilar, CNN correspondent Gabby Orr reported that there is "radio silence" among GOP officials who were planning to sit down with the candidate for one of Georgia's U.S. Senate seats and get more details about his relationship with the woman who handed over proof of his involvement in her 2009 abortion to the Daily Beast.