‘I don’t care about impeachment!’ Meghan McCain sets off epic shouting match on The View as support grows for Trump’s removal 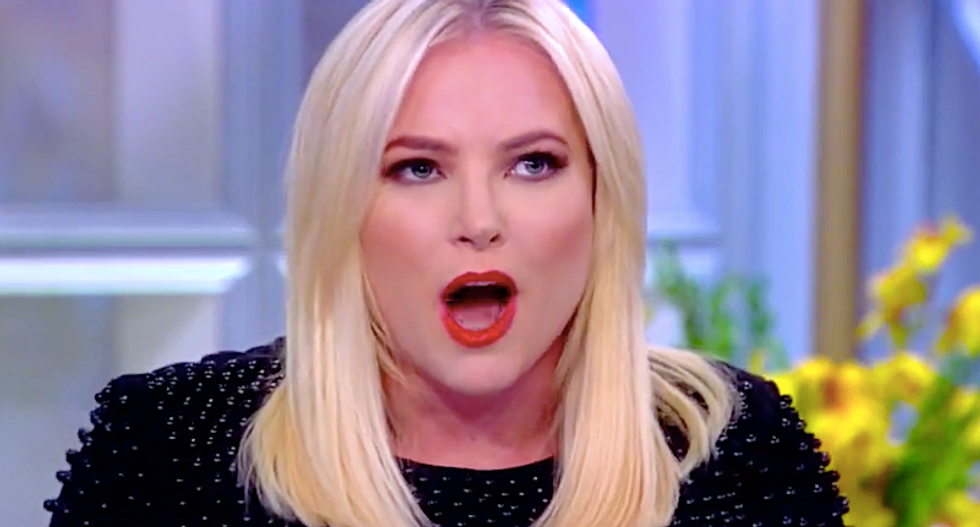 A shouting match ensued after Meghan McCain slammed President Donald Trump's decision to betray the Kurds, but said she still didn't back impeachment.

The conservative "View" co-host started off the segment by condemning the betrayal of U.S. allies, and sat silently stewing as co-host Sunny Hostin questioned the president's motives as corrupt.

New polls show a majority of Americans back impeachment and removal, and McCain tried to interject before co-host Joy Behar could jump into the conversation.

Behar argued that Republicans shouldn't get credit for turning against Trump now that the public backed impeachment, because she said they had disgraced themselves by covering for all his previous abuses.

"These same people, Lindsey Graham, 'Moscow' Mitch (McConnell), all the rest of them, Mark Meadows, Devin Nunes, all these despicable people, backed him," she said. "That is who he is, and what makes you think he cares about innocent Kurds being slaughtered when he doesn't care about innocent children being taken away from their parents? This is the same man."

"So don't tell me that the Republican Party is now standing up to him," Behar added. "They should have done it before, and we wouldn't be in this position."

McCain said the president's Middle East policy was inexcusable, but she didn't see how it was relevant to impeachment.

"I think everything is bad," she said. "I did not support what happened on the border, as you're aware. I don't care about impeachment right now. I think what is happening is so much gravely worse, and the ramifications going forward."

Hostin cut in to say she was missing the point of removing Trump from office.

"We need to care about impeachment, because if he can do this, he can do a lot worse," Hostin said, as the crowd loudly cheered. "He needs to be out of office to protect this country, and if it takes him doing this to get the Republicans on board, impeachment, then I'm all for it."