‘I have to fact-check that BS’: Nicolle Wallace debunks Trump’s ‘big lie’ on impeachment 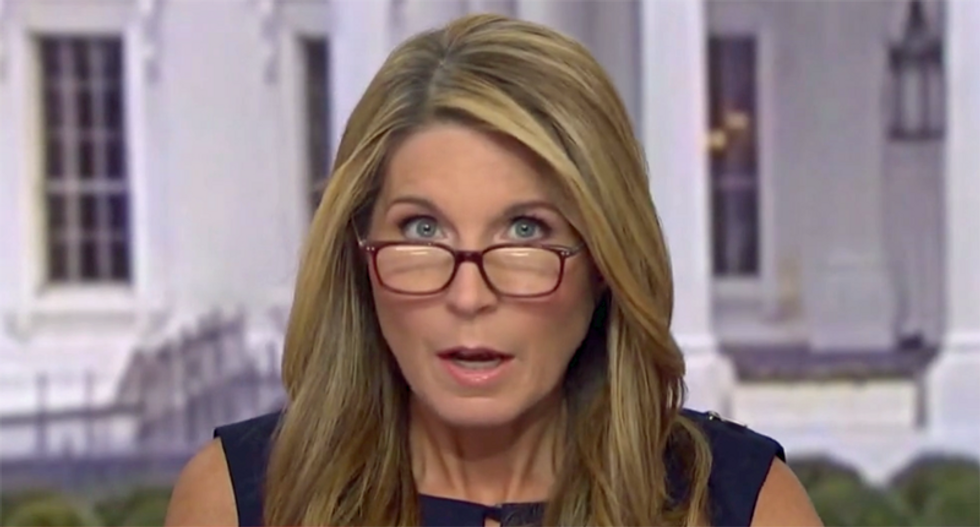 MSNBC anchor Nicolle Wallace on Wednesday debunked Donald Trump's "big lie" on impeachment after the president's rage-filled joint press conference with Sauli Niinistö, the President of the Republic of Finland.

"As public support for the impeachment inquiry into Donald Trump rises, and the House Committee is investigating the president’s request for dirt on the Bidens from a foreign government reaches deep into the West Wing with a threat of subpoenas, Donald Trump appeared to totally lose it today after a night and morning of increasingly paranoid and agitated social media posts that seem to warn of his impending outbursts," Wallace reported.

Prior to her career in journalism, Wallace was a top Republican strategist and served in the George W. Bush White House as communications director.

"The president let it rip at an Oval Office appearance. His outbursts included threats for the whistle-blower -- whose account of presidential misconduct has been almost entirely corroborated by the president himself and his personal attorney Rudy Giuliani," she continued. "The presidential tantrum came after Democrats held a press conference of their own warning that stonewalling the impeachment inquiry could lead to charges of obstruction of justice."

On the fly, the anchor changed her plan for Wednesday's "Deadline: White House" to fact-check Trump's claims from the press conference.

"I was going to do this later in the show, but this has become our thing. I have to fact-check that BS -- to borrow your word, Mr. President -- about the whistleblower complaint," she said.

"So, for everything the president’s saying about his July 25th phone call, that it’s perfect and whatnot, that it was a perfect call and anyone who has a problem with it has been misled by Adam Schiff and the whistleblower. Let’s stop with that," she said. "That’s nonsense."

"That’s the big lie because Trump, the White House, and Rudy Giuliani have now corroborated almost all of the whistleblower complaint," she explained. "The whistleblower and this complaint can disappear because this is what’s been corroborated: The president pressured Mr. Zelensky to initiate or continue an investigation into the activities of former vice president Joe Biden and his son. The White House released records that say this."

"They have coughed up confessions to everything in the whistleblower complaint," Wallace concluded.