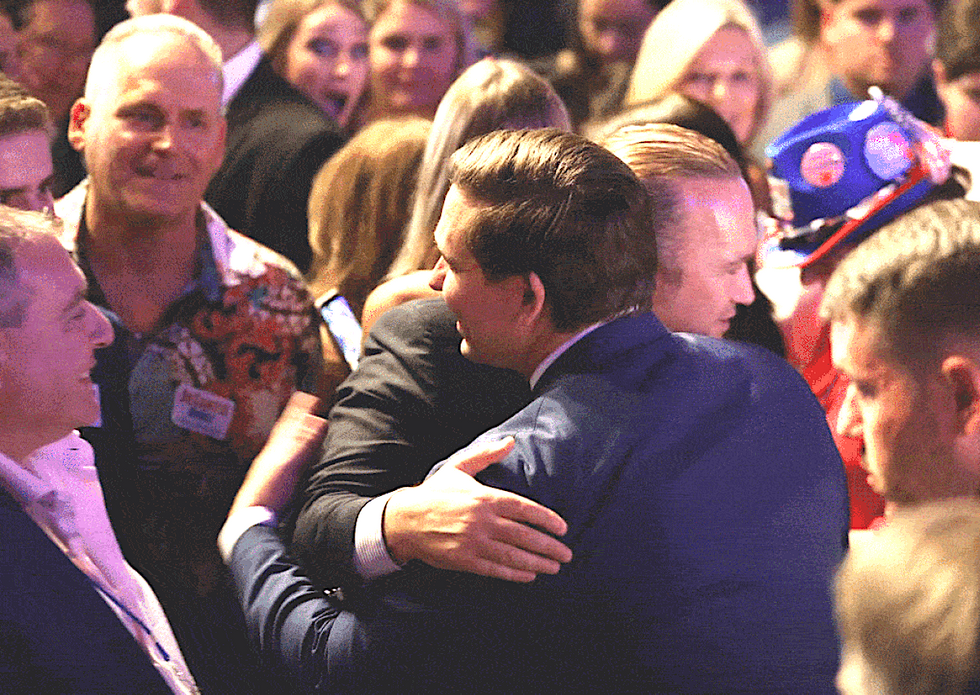 When news first broke that the two Giuliani-linked Soviet-born businessmen who were indicted on charges of interfering in U.S. elections had given $50,000 to Florida Governor Ron DeSantis’ campaign last year, a spokesperson for DeSantis claimed that the governor barely knew who the men were. Now, thanks to the Tampa Bay Times, video and photos of DeSantis enthusiastically hugging the two men at his victory party have been released.

Since then, DeSantis finally acknowledged that he indeed had a relationship with Igor Fruman and Lev Parnas, who have become major figures in the Democrats' impeachment inquiry into Donald Trump's presidency.

From the Tampa Bay Times:

...the pictures show Parnas wearing a badge stating “official guest” and the two standing next to DeSantis’ teacher from his Dunedin grade school days, a fixture at Tampa Bay area campaign events. Ferré later said "donors were likely invited” by his campaign to the party.

After the images came out, DeSantis admitted that he knew Parnas but he "didn’t know the other guy as much."

It's still not known why the contribution, which took place one day before President Trump endorsed DeSantis, was given, but prosecutors contend that the pair's contributions were in exchange for political favors. DeSantis has since ordered his political committee to return the $50,000 donation.

The Miami Herald reported Wednesday that Parnas and Fruman may have sought a foothold into Florida’s lucrative medical marijuana market. As of Friday, DeSantis had not called for an investigation. A lawyer for the men didn’t respond to a request for comment.

In many respects, Parnas and Fruman reflect the pool of people DeSantis turned to when he declared his candidacy as a relatively unknown congressman and Trump ally. Running for governor without the support of Florida’s GOP’s establishment, DeSantis leaned on Trump’s network of financiers, some with backgrounds that likely would have raised red flags in other campaigns.