John Oliver defends Kurds against 'weird monster' Trump: 'They volunteered for two more wars than he ever did' 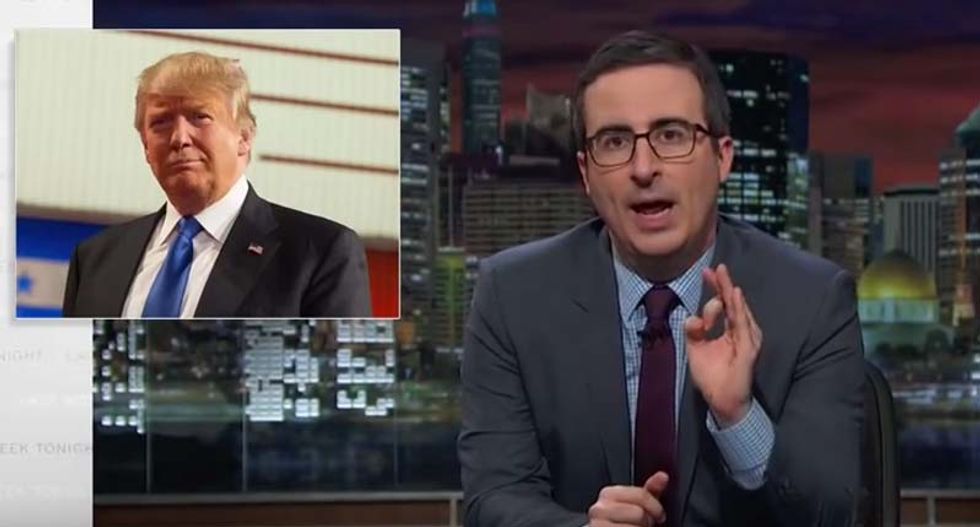 The host began by playing the footage of Trump's Sunday press conference announcing that the U.S. had killed a key ISIS fighter, in part, thanks to the intelligence gathered by Kurds.

"It's sand and death," Trump claimed. It is something Oliver said he should be used to by now since he has so many golf courses in Florida.

Oliver went on to explain why Trump's call with Turkish President Recep Tayyip Erdoğan gave the American president the most epic shade by throwing away his letter and invading the area when U.S. soldiers weren't even out of the way.

"America left the region like you leave a party after you've clogged a toilet," Oliver said.

Now, thanks to Trump abandoning the area, the Kurds are cutting a deal with the head of Syria while Russia swoops in to take over in America's absence.

Oliver closed by quoting Trump's Dallas rally where he claimed the Kurds were like children who simply needed to "fight it out." Meanwhile, footage was coming out of the area showing Turkish troops shooting Kurds on the road-side while chanting "God is Great" and begging others to film them.

"The f*ck are you talking about?" Oliver asked after seeing the clip of Trump. "That's not true for Syria and it's also not true for kids, you weird monster! Trump just revealed what, essentially, we've always known: he's not just a sh*tty president and a sh*tty person, he's a sh*tty dad. Thank God he never had to raise any children!"

Oliver confessed that former President Barack Obama's Syria policy had its problems as well, but that Trump's is so bad that it's shocking someone could manage to get it that wrong.