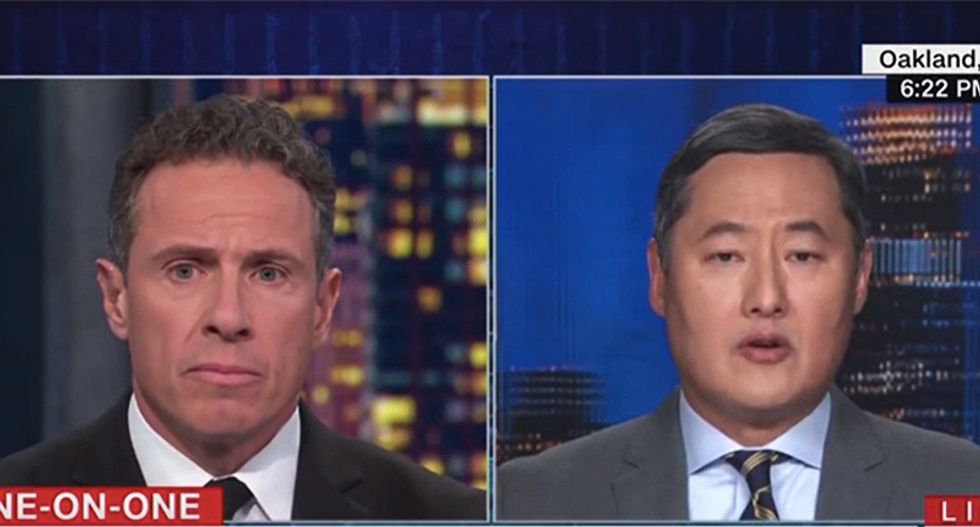 After facing uproar for insinuating on Fox News that Lt. Col. Alexander Vindman might be a double agent for Ukraine, former Bush Administration lawyer John Yoo appeared to walk all of it back under questioning from CNN's Chris Cuomo — and admitted that the transcript of President Donald Trump's Ukraine call shows he tried to extort Biden dirt out of their leadership.

"Look, if you say you're sorry, that's good enough for me on this show, but I want to go through it," said Cuomo. "You're a smart guy, I've done my homework on you. Laura Ingraham was trying to assassinate the character of Vindman. She's a proxy for our president, she's a brilliant legal mind, a talented communicator, and she was trying to protect this president. How could you have thought she was talking about Ukraine when she was talking about Vindman? You know they came to him for help with Giuliani. He was doing his job. How could you let her get away with that?"

"I really do think that the Ukrainians are the ones engaged in espionage," said Yoo.

"How is that espionage? You thought that's what she was referring to?" said Cuomo. "Go ahead, explain."

"I was listening to her description of the story and what I focused on was a foreign government trying to call an official at our National Security Council and get advice on how to agree with Rudy Giuliani, who I agree with you has gone completely off the reservation," said Yoo. "That's an effort to make a contact and engage in espionage. Not on Lt. Col. Vindman's part. I don't have any doubt he did the right things in reporting his concerns up the chain of command. I'm not questioning his patriotism in any way."

"What do you think about Laura Ingram doing exactly that?" Cuomo pushed him. "I know you like going on Fox News, I know you defend the president from time to time. I have no problem with that. You're welcome on this show to do the same thing. But you're going to go on a show and listen to someone impugn someone who tried to discuss the president?"

"He was confirming the facts of what we already knew, which was that President Trump had made a call with the president and had seemed to ask for a quid pro quo between releasing Ukrainian aid and conducting some investigation into Hunter Biden and his service on a natural gas company," said Yoo.

"You don't have any question on what actually happened here, do you?" said Cuomo. "Do you need any more proof that the president clearly wanted an investigation of the Bidens, and clearly they were holding up aid in a meeting until he got a public recognition that that would happen?"

"No, actually, I don't have any doubts about that because you can read them in the transcript of the phone call that the White House released," said Yoo. "My point was that Lt. Col. Vindman shouldn't be the key character in all this. He's just confirming all the facts laid out in the previous testimony and in the telephone call."