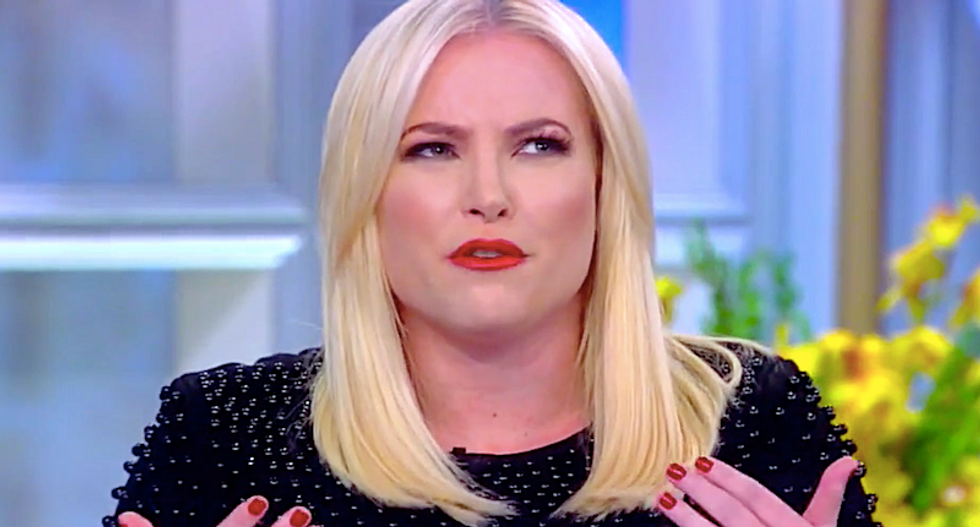 "The View" panelists were discussing the controversy of talk show host Ellen DeGeneres sitting at an NFL game with former President George W. Bush, and McCain said she didn't see the problem with it.

"I'm, like, somewhere in the middle on all of this," she said. "It's not that we can't have be friends on both sides. Obviously we all do, any normal person probably does. I don't choose my friends based on their political background -- I mean, unless it's radical."

"I would have a hard time being friends with Rand Paul or anyone associated with him," she added. "I say it on the show every day because I won't be here tomorrow. Blood on your hands, Rand Paul."

McCain shares an enmity for the Kentucky Republican with her late father, who lost his first GOP presidential primary bid to Bush.

"There is a revisionist history with the Bush administration that I take intense umbrage with," McCain said. "I think great, Michelle Obama wants to be friends with him, but I remember all the things said about him in power. I remember people calling for his impeachment, a warmonger, lied about weapons of mass destruction, Hurricane Katrina, and part of this is confusion."

She accused Democrats of hypocrisy, although many on the left were angry with the former first lady for her warm relationship with the ex-president at his father George H.W. Bush's funeral.

"Did your opinion on Hurricane Katrina and the Iraq War change?" McCain said. "There has to be a level of consistency with your politics."

McCain then took that logical fallacy to another illogical conclusion, saying that Republicans had turned to Trump in reaction to being called racist by Democrats.

"My husband (Federalist co-founder Ben Domenech) says when you cry wolf with every Republican -- which is what I believe happened with Bush, (Mitt) Romney, my father on forward -- sometimes when you cry wolf, the beast shows up," she said, "and the beast is Donald Trump."

McCain said Democratic criticism of GOP candidates and presidents had forced Republicans to vote for Trump, who insulted her father's military service and continues to slur his memory as president.

"I think part of the reason is maybe take a second look at some conservatives when you talk crap about them while they're in power," she said.