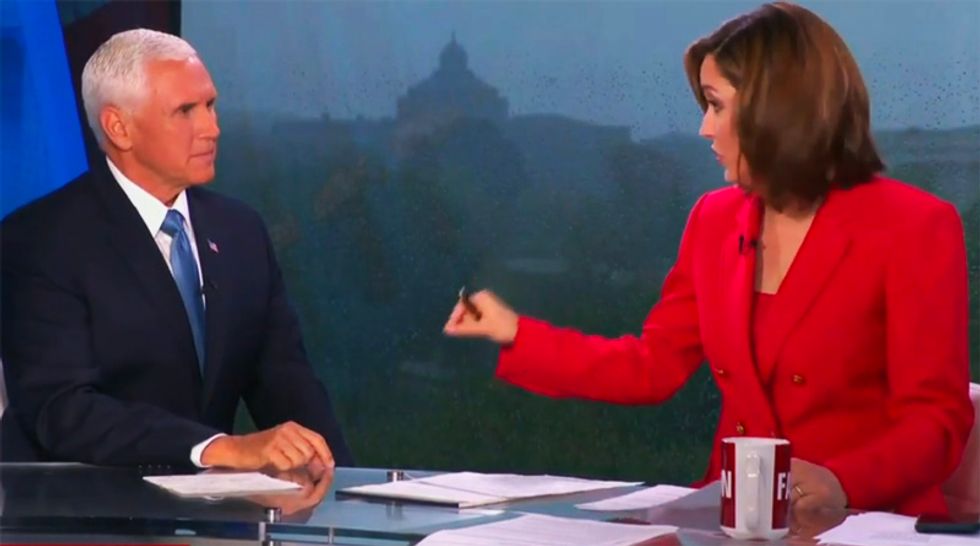 Vice President Mike Pence tapdanced his away out of calling multiple career U.S. diplomats "liars" at the prompting of Face the Nation host Magaret Brennan on Sunday morning.

Asked about credible testimony from multiple State Department officials and ambassadors that Donald Trump tried to offer foreign aid to Ukraine for dirt on political opponents, Pence seemed to want to have nothing to do with the line of questioning.

“We have had at least four U.S. officials under oath say that they had knowledge of a deal being offered that made military aid and a meeting with the president contingent on opening an investigation that relates to the company Joe Biden’s son served on the board of,” Brennan began. “Are they all lying?”

Saying the president did "nothing wrong," Pence grimaced before attempting to change the focus of the question.

“What I can tell you is all of my interaction on this issue with the President of the United States and President Zelensky focused entirely on three things," he recited. "Number one, the United States of America’s support for Ukraine following the Russian invasion of Crimea and the war that Russia has been fomenting there. Number two, President Zelensky was elected in a historic landslide… on an agenda to end corruption in Ukraine. And we very much wanted to understand the progress on that. And thirdly, President Trump believed that it was time for the European community to step up.”

“Are you saying you did not ever hear of such a deal? Is that what I understand you’re describing?" Brennan pressed as the vice president talked over her.

Pence again insisted it was not a part of his "interactions" with Trump.