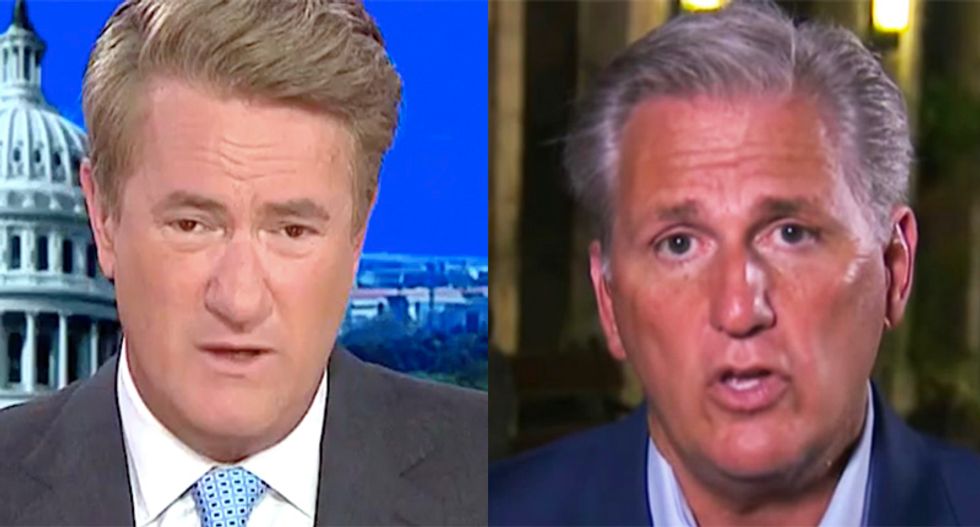 "Morning Joe" host Joe Scarborough fired a shot across the bow of House Minority Leader Kevin McCarthy (R-CA) on Thursday morning for throwing his full support behind Donald Trump just moments before the House voted 232-196 to go forward with impeachment proceedings against the president.

After McCarthy gave an impassioned speech on the House floor defending the embattled president, the MSNBC host was quick to remind him that he once told a closed-door meeting of Republicans that he believed Trump and a California Republican were on the payroll of the Kremlin.

As the Washington Post reported in 2016, McCarthy claimed, "'There’s two people I think Putin pays: [Rep. Dana] Rohrabacher and Trump,' McCarthy (R-Calif.) said, according to a recording of the June 15, 2016, exchange, adding, "Rohrabacher is a Californian Republican known in Congress as a fervent defender of Putin and Russia."

With that in mind, Scarborough wrote, "The man who said Donald Trump was being paid off by Putin is now on the House floor defending the same man. What changed, Kevin?"

The man who said Donald Trump was being paid off by Putin is now on the House floor defending the same man. What c… https://t.co/rrofKOmXo2
— Joe Scarborough (@Joe Scarborough)1572533593.0