'My nightmare scenario': Here are 7 key revelations from the damning texts from the Ukraine investigation 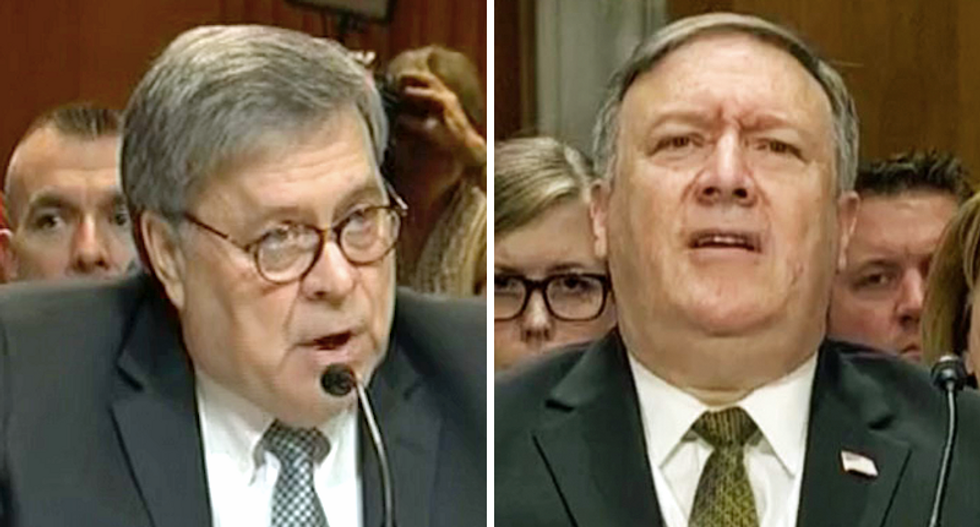 On Thursday night, Democratic leaders in the House of Representatives released a set of text messages they have received in their investigation of the State Department and its involvement in the Ukraine scandal.

Some of the texts had leaked out prior to their official release, painting a somewhat confusing and unclear image of what they actually mean. Read all together in chronological order, however, they strongly bolster the case that President Donald Trump — using both his personal attorney Rudy Giuliani and the State Department — carried out an illicit pressure campaign to induce Ukraine to investigate his political enemies.

Here are 7 key details from the texts:

1. Ukraine feared it would be used as an "instrument" in American "domestic, reelection politics."

Top U.S. diplomat Bill Taylor comes out the cleanest from the texts of the State employees, showing the most consistent concern for the wellbeing of Ukraine. In one exchange, he wrote on July 21 to United States Ambassador to the European Union Gordon Sondland — a top donor to Trump — that Ukrainian "President Zelenskyy is sensitive about Ukraine being taken seriously, not merely as an instrument in Washington domestic, reelection politics."

Sondland replies "Absolutely," but quickly pivots back to getting a conversation started between Trump and Zelensky. This shows that even before Trump's infamous July 25 call with Ukraine, the country's government feared it would be used for the president's reelection campaign. This is exactly what Democrats accuse Trump of doing when he told Zelensky to open an investigation into Joe Biden, a potential 2020 opponent. It's the whole reason the House's impeachment inquiry has been reinvigorated.

But it gets worse.

Former U.S. Special Representative for Ukraine Kurt Volker — who recently resigned after his involvement in the scandal was revealed — sends one of the most jaw-dropping single messages in the bunch. He lays out an explicit quid pro quo in a text to Ukrainian official Andrey Yermak on July 25, the same day as Trump's call:

Kurt Volker: Good lunch - thanks. Heard from the White House—assuming President Z convinces trump he will investigate / "get to the bottom of what happened" in 2016, we will nail down date for visit to Washington. Good luck! See you tomorrow- kurt

This is a bombshell. It shows the White House set up a clear offer of an official U.S. government action — a visit to the White House — in exchange for Ukraine's delivering investigations of the president's political rivals. (In addition to the investigation of Biden and his son Hunter's company Burisma, Trump has asked Zelensky to investigate conspiracy theories about the 2016 election and collusion between Ukraine and Hillary Clinton.)

In an Aug. 9 conversation between Sondland and Volker, Sondland mentioned that he has made progress on getting the Ukrainian, Yermak particularly, to agree to issue a statement confirming the beginning of an investigation into Burisma and the 2016 election. This confirms Trump's direct influence throughout the effort.

Volker responds: "But does he know that?" (The context isn't entirely clear, but it seems Volker means Yermak.)

The existence of the statement is also important. Typically, criminal investigations aren't announced, unless they're already largely happening in public — unneeded publicity can alert the potential criminals. But you would want the investigations to be announced publicly if the point was to smear your political opponents.

4. Volker solicits Giuliani's input on the statement Zelensky is to deliver on Aug. 9.

Kurt Volker: Hi Mr Mayor! Had a good chat with Yermak last night. He was pleased with your phone call. Mentioned Z making a statement. Can we all get on the phone to make sure I advise Z correctly as to what he should be saying? Want to make sure we get this done right. Thanks!

The fact that a government employee had to get Giuliani's input on this matter — the president's outside attorney who had previously said he was acting in Trump's personal interest — shows that the endeavor was a corruption of U.S. policy. It also supports the claim that the effort all about Trump's personal electoral fortunes, not the good of the country.

In one brief exchange on Aug. 28 between Yermak and Volker, the Ukrainian official initiated by saying he needed "to talk with you," and then sent a link to a Politico article revealing that Trump had stalled congressionally approved military aid to Ukraine. Volker agreed to talk.

6. Taylor fears the military aid is tied to the quid pro quo.

On Sept. 1, Taylor explicitly asked Sondland: "Are we now saying that security assistance and WH meeting are conditioned on investigations?" Sondland only tells Taylor to call him in response.

On Sept. 8, Taylor is clearly still worried about the aid — and he's worried that Trump won't live up to his side of the apparent bargain. He wrote in a group text to both Sondland and Volker: "The nightmare is they give the interview and don't get the security assistance. The Russians love it. (And I quit.)" [Note: Taylor may mean "press conference" here, rather than "interview," referring to the press conference where Zelensky would announce the investigations Trump wanted.]

7. Taylor ties the military assistance to the election interference.

"The message to the Ukrainians (and Russians) we send with the decision on security assistance is key," Taylor wrote to Sondland on Sept. 9. "With the hold, we have already shaken their faith in us. Thus my nightmare scenario."

A bit later, he added: "As I said on the phone, I think it's crazy to withhold security assistance for help with a political campaign."

Then there was a long break in the exchange. But about five hours later after Taylor sent that damning message, with an explosive claim that has shaken American politics, Sondland replied:

Bill, I believe you are incorrectly about President Trump's intentions. The President has been crystal clear no quid pro quo's of any kind. The President is trying to evaluate whether Ukraine is truly going to adopt the transparency reforms that President Zelensky promised during his campaign I suggest we stop the back and forth by text If you still have concerns I recommend you give Lisa Kenna or S a call to discuss them directly. Thanks.

This quote is crucial, because Republicans will surely use it to defend Trump. But given the rest of the conversations — none of which mention the innocuous-sounding "transparency reforms," but instead, politically charged investigations desired by the president — as well as the long pause, it seems clear Sondland got spooked. It seems as though he's aware that Taylor just alleged they could be involved in a criminal conspiracy. He even seems to realize his own texts might one day soon become evidence. So he casts doubt on Taylor's interpretation of events, which is well supported by the rest of the material, and he makes unconvincing claims before suggesting they stop texting.

Taken as a whole, the texts are a profoundly damning set of records.