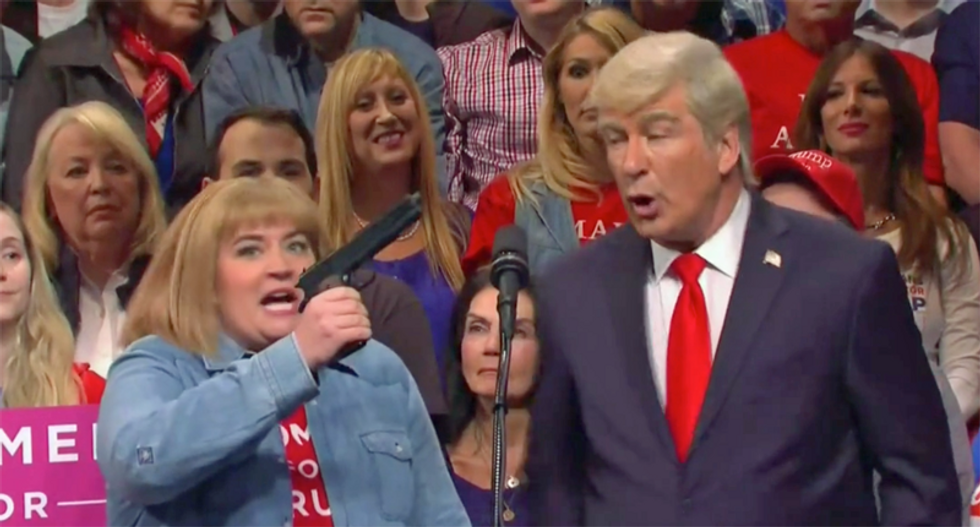 "Hello, New Mexico. By far, my favorite Mexico. So great to be here in the great city of Albacore, tuna capital of the United States," he said.

"I came back for a surprise rally because I heard they’re building a wall. On the border of Colorado. To keep the New Mexicans out," Trump claimed.

The president then made the case that the impeachment inquiry is a witch hunt and to say there was no quid pro quo.

"These Democrats led by Adam shifty-Schiff, he’s a real Schiff-head, a deep-state conspiracy, and tonight I would like to bring up some of my loyal followers to explain what’s really happening in this country," he said.

He was joined on stage by a white woman with a misspelled T-shirt.

"This man is under attack. It’s deep state lizard conspiracy and everyone’s in on it," the woman shouted.

Next, a supporter from Bikers for Trump joined him on stage.

"And do you know why they’re doing this to me?" Trump asked.

"I do, sir, because I watched it in a news machine. All this man did was shakedown a foreign government to get dirt on his political enemy. I mean, is that wrong?" the motorcycle enthusiast asked.

"Yes!" the crowd shouted in unison.

"Sorry, no!" the crowd repeated back to him.

"Sir, I love you, and I don’t care what they say, I know it’s big," he said, pointing towards Trump's pants.

Another supporter said, "I love you. And I worship you as the one true white lord!"

She attempted to hand Trump a handgun after he vowed to shoot on Fifth Ave the author of an upcoming, anonymous book about his administration.

Trump was thanked by an ISIS member who had recently been freed from captivity in Syria after Trump's decision to abandon America's Kurdish allies.

Also in attendance was Facebook CEO Mark Zuckerberg, who Trump said is "one of us now" after he "got his ass completely owned" by Rep. Alexandria Ocasio-Cortez (D-NY).