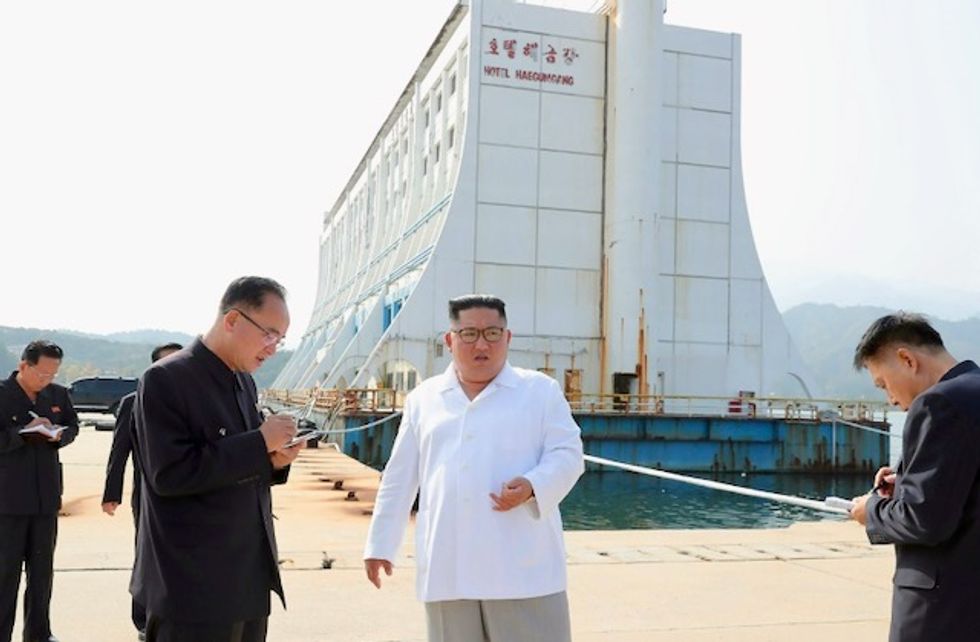 North Korean leader Kim Jong Un has condemned a flagship tourist development with the South as an eyesore and ordered buildings there demolished, state media reported Wednesday, in a stark illustration of dire relations between Pyongyang and Seoul.

The Mount Kumgang tourist complex was built by Southern company Hyundai Asan in the North on one of the peninsula's most scenic mountains, drawing hundreds of thousands of Southern visitors.

But tours came to an abrupt end in 2008 after a North Korean soldier shot dead a Southern tourist who strayed off the approved path and Seoul suspended travel.

Pyongyang has long wanted to resume the lucrative visits, but they would now violate international sanctions imposed on North Korea over its nuclear and ballistic programmes.

Kim visited the site and lambasted the "shabby" buildings as "just a hotchpotch with no national character at all", the North's official KCNA news agency reported, adding "they were built like makeshift tents in a disaster-stricken area or isolation wards" and "very backward in terms of architecture".

"He instructed to remove all the unpleasant-looking facilities of the south side," KCNA said, "and to build new modern service facilities our own way".

The announcement is a striking repudiation of what was once one of the two biggest inter-Korean projects, along with the now-shuttered Kaesong Industrial Complex, where Southern companies employed North Korean workers while paying Pyongyang for their services.

It came only a day after the South's President Moon Jae-in -- who has long championed engagement with the North -- touted the benefits of a possible "peace economy" in a speech to Seoul's parliament.

But contact between the neighbours stalled after the collapse of a February summit between Kim and US President Donald Trump in Hanoi, and Pyongyang has since repeatedly excoriated Seoul, saying it has "nothing to talk (about) any more" with the South.

Seoul's presidential office said it would "analyse Pyongyang's position and its plans", with an official telling reporters it would seek to "consult with the North on areas that can be discussed".

Kim was accompanied on his visit by his wife Ri Sol Ju, KCNA pictures showed, in her first public appearance since Chinese President Xi Jinping visited Pyongyang four months ago.

While Kim said the demolitions should proceed "with an agreement with the relevant unit of the south side", he added the view that Mount Kumgang was "a common property of the north and the south" was "a mistaken idea and a misguided understanding".

"Mt Kumgang is our land won at the cost of blood and even a cliff and a tree on it are associated with our sovereignty and dignity," it cited him as saying.

"We will always welcome our compatriots from the south if they want to come to Mt Kumgang," he said, but it was "not desirable to let the south side undertake the tour of Mt Kumgang, our famous mountain".

The resort's developer Hyundai Asan is part of the Hyundai Group, whose founder Chung Ju-young was born in the North and which has been at the forefront of inter-Korean economic projects.

In 1998, the same year the resort opened, Chung became the first civilian to cross the land border since the end of the 1950-53 Korean War when he transported 1,001 cows to the North.

The beasts were given to the authorities in symbolic recompense for a cow he stole from his family as a teenager to fund his journey south.

But Hyundai's involvement with Pyongyang has proved controversial, and in 2003 Chung's son and successor Chung Mong-hun committed suicide by jumping off the company headquarters after being questioned by prosecutors investigating illicit fund transfers to the North.

A company representative told AFP they were "taken aback" by Wednesday's announcement "as we have been preparing for the resumption of tours", adding they would "deal with it calmly".