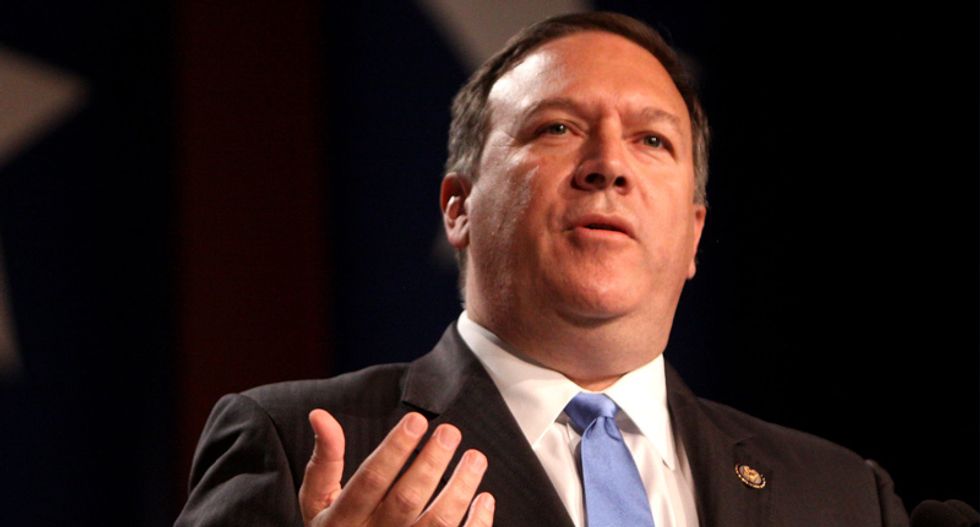 The website of the U.S, Department of State currently features a photograph of Secretary of State Mike Pompeo and the words, “Being a Christian Leader.”

The link on the State Dept. homepage goes to a video and the text of Pompeo’s speech to the American Association of Christian Counselors in Nashville, Tennessee on October 11.

Secretary Pompeo’s speech focuses on how he leads the Dept. of State as a devout Christian. He says he keeps a Bible open on his desk and refers to it during the day.

That in itself would not be exceptionally disturbing except that Pompeo, an evangelical Christian, has said the Bible “informs everything I do.”

He has said it’s “possible,” when asked if God made Trump president “to help save the Jewish people from the Iranian menace.”

And he has said the wars in the Middle East are a “never-ending struggle” until “the rapture.”

Studies show that white evangelicals are much more likely than other Americans to believe that Israel fulfills a biblical prophecy. Known as Christian Zionists, they believe God promised the land to the Jews, and that the gathering of Jews in Israel is foretold in the prophecy of the rapture — the ascent of Christians into the kingdom of God.

Mr. Pompeo talks about the rapture. “We will continue to fight these battles,” he said at a “God and Country Rally” in 2015, because there is a “never-ending struggle” until “the rapture.”

An L.A. Times opinion piece, referring to those remarks, said Pompeo “has his eye on an End Times cleansing.”