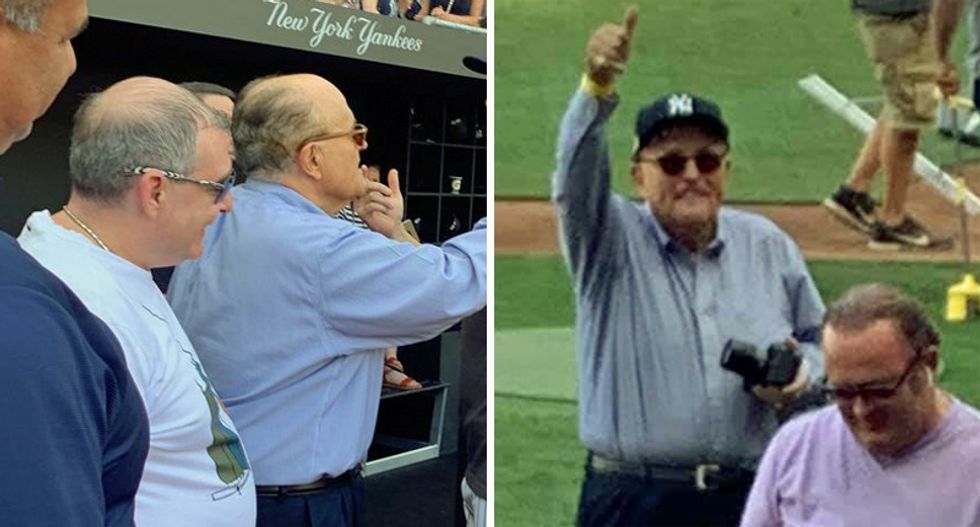 Former New York City Mayor Rudy Giuliani is claiming that a yet-to-launch podcast paid for him to travel to London to see a Yankees game in June.

"Photos from a trip to London in June 2019 show President Donald Trump's personal attorney Rudy Giuliani and a now-indicted associate Lev Parnas having a VIP experience at two baseball games between the New York Yankees and the Boston Red Sox," CNN reported Saturday. "The trip also included Giuliani speaking at a luncheon for a Ukrainian charity group connected to Parnas and Igor Fruman, another recently indicted associate."

"Photos posted on social media show Parnas attended the charity event, as well as an official from a public relations firm that has worked with the Ukrainian government along with a former spokesman and associate of Ukrainian oligarch Dmitry Firtash," CNN reported.

Firtash is currently under house-arrest in Vienna after being released on $172 million bail.

Giuliani himself posted a photo of him standing on the field next to Parnas.

Giuliani told CNN he did "not recall meeting anyone associated with Firtash" and that "part of the trip" was paid for by a podcast.

"Giuliani reportedly said in a deposition related to his divorce he was paid to go on the trip by the still unlaunched podcast, which he also later told CNN in an email," the network reported.

Major League Baseball is claiming they don't know how Giuliani's indicted associates made it onto the field.

"Neither Mr. Parnas or Mr. Fruman were credentialed for the games in London. I am unaware of how they ended up on the field," said MLB spokesman Pat Courtney.