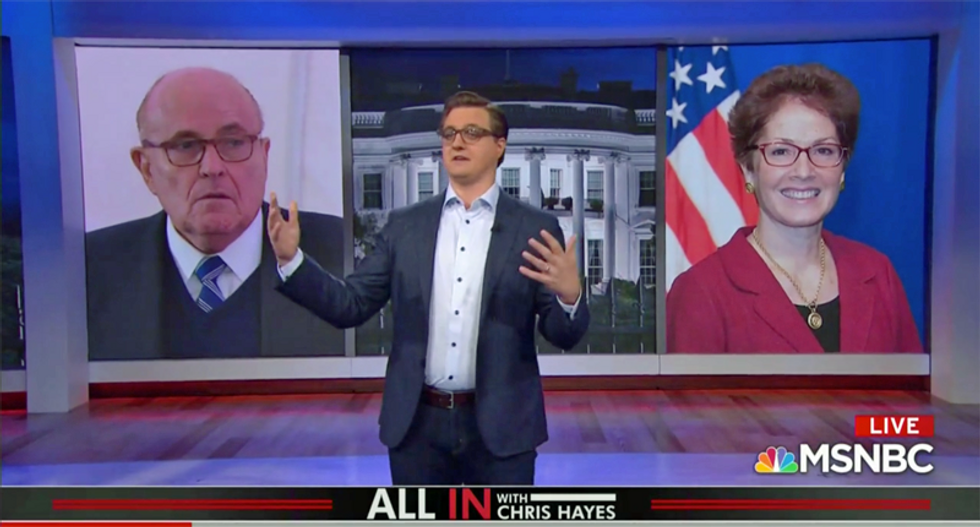 MSNBC anchor Chris Hayes revealed why President Donald Trump's plan for foreign election interference didn't work during a special edition of "All In" before a live studio audience.

"We’re not even three weeks into the formal impeachment inquiry," Hayes noted. "We’re already in the star witness phase of things. Today in defiance of Donald Trump, in defiance of the State Department, in defiance of Mike Pompeo, this woman just wrapped up over nine hours of testifying before the House investigative committee. Yes, that’s a long time. "

"Her name is Marie Yovanovitch. Now she’s a career diplomat, has multiple foreign postings, and she’s also the former U.S. ambassador to Ukraine," he said.

Hayes offered his theory for explaining the tension within the federal government during the Trump era.

"In fact, I think you can tell the whole story of this scandal and indeed the whole Trump Era as a story of two archetypes, the bagman Rudy Giuliani and the civil servant Marie Yovanovitch," he explained. "Trumpism can only be implemented by lackeys and by bagmen like Rudy Giuliani."

"Rudy Giuliani is just a fixer with a law degree, and he has apparently been tasked with a pretty clear mission by the president, which is to 'manufacture dirt on my political enemies so that I can get re-elected.' Instead of running a foreign policy for the people of the country that represents our collective interests, Donald Trump and Rudy Giuliani are running and have been running a shadow foreign policy that has nothing to do with the interests of the United States," he explained.

"And now as the sheer scope of this thing keeps getting bigger and bigger, they’re all desperate to cover it up. But the problem here is that there are more Marie Yovanovitch's out there," Hayes concluded. "Believe me."