Seth Meyers: Trump is going to lose it when he finally reads the Constitution one day 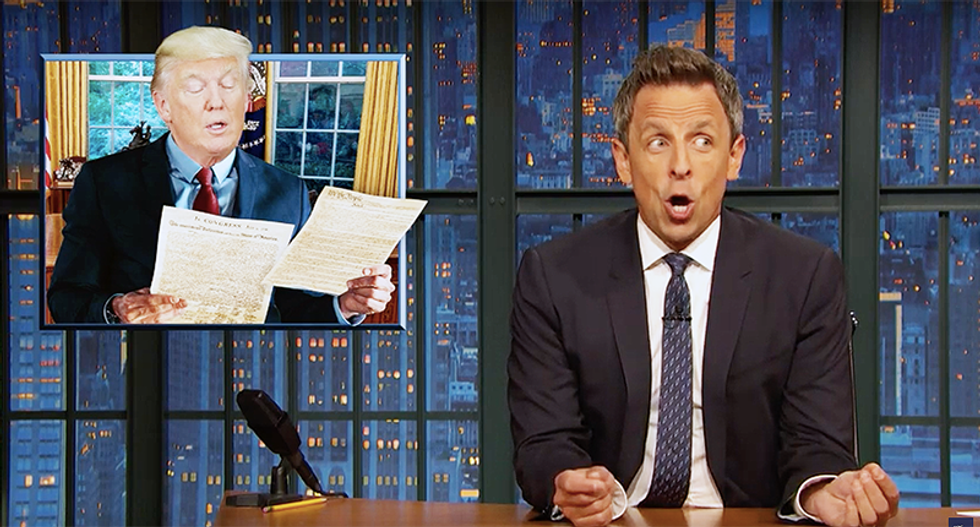 "Late Night" host Seth Meyers couldn't help but laugh at President Donald Trump for not having any clue what was actually in the Constitution.

In a surprise move, Trump's lawyers sent a letter to Congress alleging that their impeachment inquiry was unconstitutional. It's a move that many legal scholars scoffed at and said no lawyer should put their name on such a letter, since impeachment is actually outlined in the Constitution.

Meyers went back to the 2016 campaign days when it was clear Trump had no idea what he was talking about regarding America's founding documents.

"It's all about the Constitution, of, of, and, so important," Trump said during the presidential debate. "The Constitution. The way it was meant to be."

Meyers showed another clip of Trump from Dec. 2015 in which Trump said the media wanted to "surrender our Constitution," except that document gives the media the right to a free press.

Meyers had no idea what Trump was talking about, noting the Constitution didn't go anywhere.

Trump, however, has done whatever he can to undermine key pieces of the Constitution that involve oversite of the executive branch.

Meyers said in his Trump impression: "Let's see here. Oh no! Oh, no! Oh boy. High crimes and misdemeanors? I did both of those this morning. Oh, there better not be anything in here about golf. Oh no!"