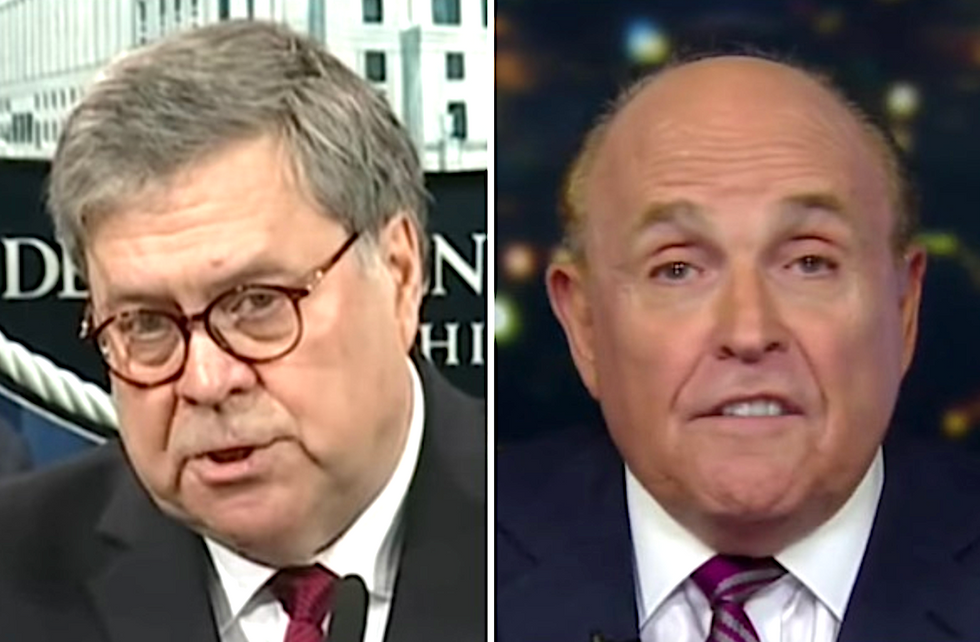 As the White House tries to establish a coherent narrative in response to the impeachment inquiry launched by House Democrats last week, tensions between President Trump's personal lawyer, Rudy Giuliani, and his Attorney General, William Barr, are further complicating the process, The Wall Street Journal reports.

According to the report, Trump is simultaneously getting advice from the two very different lawyers who he reportedly sees as interchangeable, as evidenced by his infamous July 25 call with Ukrainian President Volodymyr Zelensky where he said that he'd put Zelensky in touch with one or the other to investigate 2020 presidential candidate Joe Biden -- a lack of distinction that reportedly shocked and angered Barr. Now Democrats are again calling Barr's credibility into question, and the Attorney General is finding himself at the center of Trump's latest scandal.

People close to Barr say that he and Giuliani are not on the closest of terms. Barr has also reportedly expressed frustration that Giuliani is "meddling in matters that should be handled by officials in government" and thinks he isn't helping Trump's presidency.

“The only person that likes Rudy on TV right now is Trump,” said a person close to the president.

As The Wall Street Journal points out, the two men couldn't be more different. Giuliani's combative and sometimes incoherent cable TV interviews are a stark contrast to Barr, who mostly operates behind the scenes and says very little publicly. Nevertheless, Trump values Giuliani's loyalty and his willingness to be an unwavering foot soldier and the two have a long history together. Trump didn't know much about Barr before selecting him to be Attorney General, but the two grew closer as the Mueller investigation wound down.

"As Mr. Trump’s personal lawyer, Mr. Giuliani’s job is to defend the president; as attorney general, Mr. Barr’s is to defend the Justice Department and the institution of the presidency," the Wall Street Journal's piece states. How that contrast will continue to play out remains to be seen.