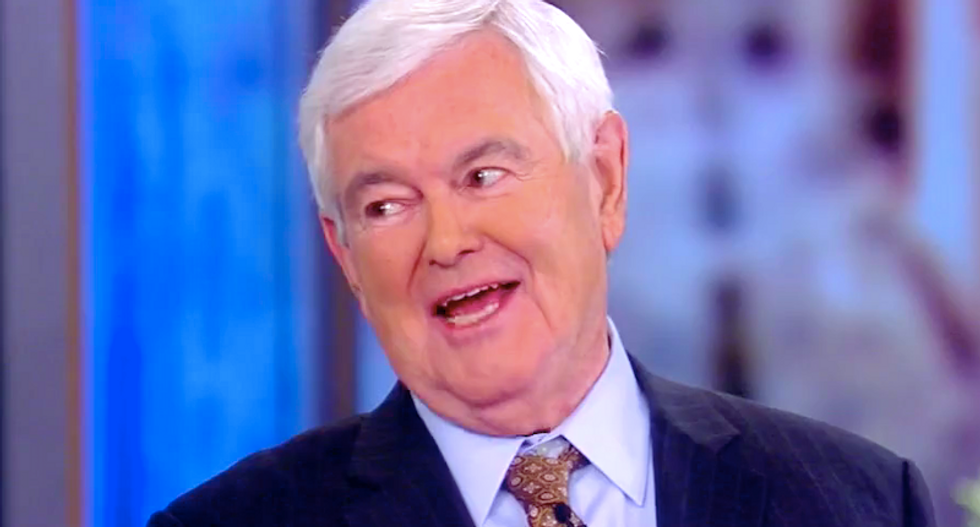 "The View" invited Newt Gingrich to sit in as guest host, and the audience cheered as his fellow panelists dismantled his defense of President Donald Trump.

Host Whoopi Goldberg asked the former House Speaker to comment on Trump comparing his impeachment inquiry to a "lynching," and Gingrich said he agreed.

"Look, put yourself -- this is really a big leap -- but put yourself for a second in Trump's shoes, okay?" Gingrich said. "You got beaten up for over two years with the Mueller thing. You start to relax. All of a sudden there's this whole new wave of things, and I think part of what you have is a guy here who's just really deeply frustrated that no matter where he turns, you know, the fight keeps going on. "

Conservative co-host Abby Huntsman asked if the president brings a lot of his troubles on himself, and the audience cheered and applauded.

"I think he's a very important historic figure," Gingrich responded, "but I do think there are things that he does that make it all harder. I think that, you know, at times I think that had he been -- if he were more disciplined, he would have a much easier road than he does. He sort of chews up his own road."

Huntsman said the president seems to enjoy the controversies he kicks up, such as his decision to award a government contract to himself to host the G7 summit at his Doral resort.

"In his mind, do you think it's a game to piss off the media, piss off Democrats or does he genuinely see a problem with it?" Huntsman said.

Goldberg joined in next.

"Doesn't he have anything better to do?" she said, as the audience cheered again. "Listen, Newt, you and I have known each other a long time, and when a giant, 6-foot white guy says, 'I'm being lynched here,' you understand why it's a little bit like, listen man, you're not being lynched here. You are being held to the standard that we hold every -- we're supposed to be holding every president to."

The audience cheered again, and Goldberg challenged the former House speaker to defend Trump for questioning the Constitution's emoluments clause as "phony."

"You've never pooped on the Constitution as far as I can recall," she said.

Gingrich then started to change the subject to Rep. Adam Schiff (D-CA), whom he misidentified as "Steve," but co-host Sunny Hostin challenged him to defend Trump's "lynching" complaint.

"Okay, all right, I'm going to be very politically incorrect," Gingrich said. "Most of the early American movies on lynching were about lynching white people. One of the largest lynchings of the 19th century was Italians, so there is a tradition here. It's not only about black people."

Goldberg and Hostin argued that Gingrich was missing the point and misrepresenting the history of lynching, and the Trump apologist admitted the president spoke "more clumsily than he should have."

"Not the question," Goldberg shot back, as the audience cheered. "You did a good spin, but what do you think? Do you think that's the language he should have used? Yes or no."