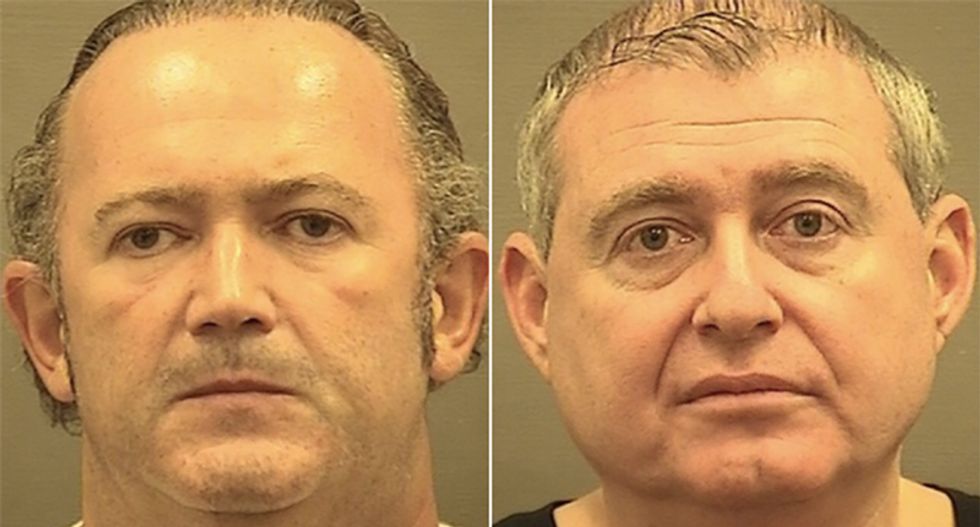 Rudy Giuliani business associates Lev Parnas and Igor Fruman were indicted and arrested Thursday morning as they were fleeing the country on a one-way flight to Europe. David Correia and Andrey Kukushkin were also charged in what Mother Jones reporter David Corn called "overlapping capers."

According to the indictments, Parnes and Fruman made secret donations to Republicans that would further their business interest and promote their agenda. They also teamed up with Parnas business partners, Correia and Kukushkin, to make donations financed by a Russian national to GOP candidates in Nevada to influence a cannabis business they wanted to start in the state.

A mysterious Russian businessman agreed to be part of the legal marijuana business and sent $1 million from an overseas account to Fruman for political contributions.

The indictment doesn't outline who the mysterious Russia businessman is, referring to them only as "Foreign National-1." However, according to state records obtained by Mother Jones from California, a Russian businessman named Andrey Muraviev worked with Kukushkin to build a cannabis enterprise in the state.

"In 2016, Kukushkin and Muraviev joined with a Sacramento businessman named Garib Karapetyan, who has been involved in the recreational marijuana business, to create a corporation called Legacy Botanical Company LLC, which was listed at a Sacramento address, according to a filing with the secretary of state in California," wrote Corn.

An email obtained cc'd Alexander Mikhalev, who says he's the chief financial officer of Parus Capital on his LinkedIn page. The fund was established in 2008 by Muraviev. In another email, Kukushkin was curious about cultivation places in Sonoma County in Northern California. He specifically mentioned "contributions" he was willing to make to ensure he got a license.

"The indictment states that in early September 2018, Parnas, Fruman, Correia, Kukushkin, and the Russian national met in Las Vegas to discuss their business venture and that 'shortly after that' the four Americans 'began to formalize' their deal with the Russian to 'fund their lobbying efforts,'" wrote Corn. "But, it adds, they 'took steps to hide' the Russian’s involvement in the venture and in any 'political contributions associated' with the project. That was due to, as Kukushkin supposedly put it, their backer’s 'Russian roots and current political paranoia about it.'"

It's unclear if Muraviev is "Foreign National-1" but Corn speculates he likely was, unless "Kukushkin has worked with more than one wealthy Russian businessman eager to enter the American pot market."