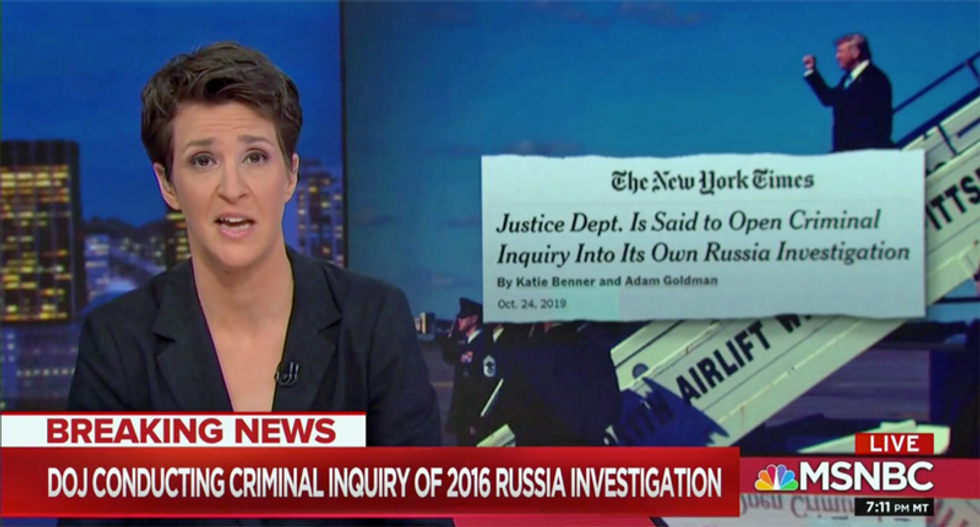 The host of "The Rachel Maddow Show" on MSNBC shocked that the Department of Justice has reportedly opened a criminal investigation into the people who investigated President Donald Trump.

Maddow noted the pattern of the Trump administration going after everyone in proximity to the Mueller report.

"The whole framework of upper-echelon intelligence and law enforcement officials, Republican and Democrat and neither, especially the ones who had direct contact with this investigation or who were experts in Russian counterintelligence or Russian organized crime, they have all already been drummed out of the government. And in many cases turned into household name villains by the president and his supporters," Maddow noted.

She explained how the entire line of inquiry stems from a right-wing conspiracy theory.

"I will say if you just step back from this for a second, the reason I think this is such a big deal is because we have seen the president and his supporters absolutely go after -- you know, guns blazing -- every senior law enforcement and intelligence official who they have been able to identify as having played any kind of key role in opening up the Russia investigation, right? But now that this has turned into a criminal investigation of the origins of the Russia investigation, that means they are considering bringing criminal charges against people who had the temerity to investigate Russia’s attack on our election and the question of whether or not the Trump campaign was involved in it," she explained.

"This is the Justice Department investigating itself, potentially bringing criminal charges against its own officials. That itself would be — that would get you a page in the history books under any circumstances. Under these particular circumstances, it’s — this is stunning," Maddow said.