Trump judicial nominee breaks into tears in hearing over scathing finding that he’s ‘arrogant, lazy’ and ‘an ideologue’ 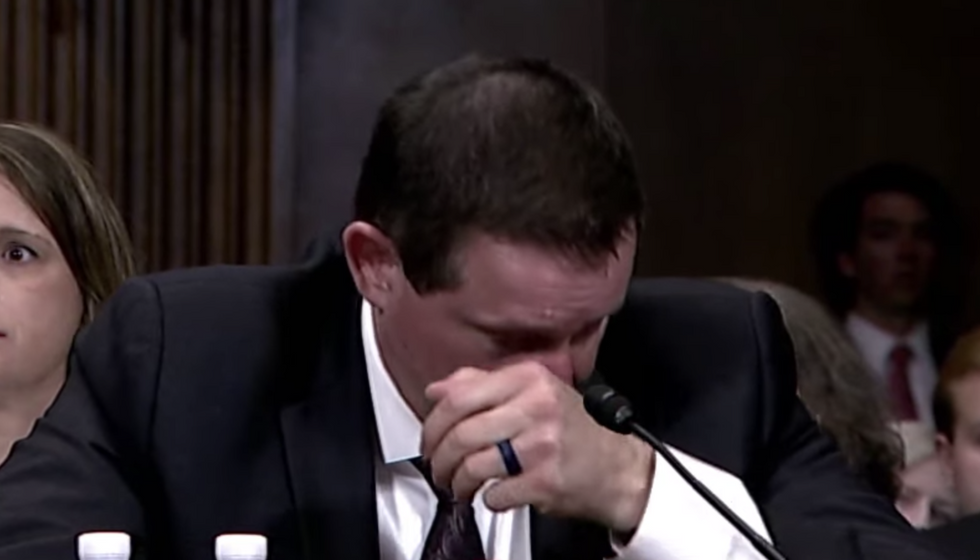 Lawrence J.C. VanDyke openly wept on Wednesday before the Senate Judiciary Committee as he was confronted with a blistering review from the American Bar Association, which found that he was not qualified to serve on the federal courts after having been nominated by President Donald Trump.

The ABA, which can’t officially block nominees but whose recommendations are seen as carrying substantial weight, wrote of VanDyke:

Mr. VanDyke’s accomplishments are offset by the assessments of interviewees thatMr. VanDyke is arrogant, lazy, an ideologue, and lacking in knowledge of the day-to-day practice including procedural rules. There was a theme that the nominee lacks humility, has an “entitlement” temperament, does not have an open mind, and does not always have a commitment to being candid and truthful.

persons who are gay, lesbian, or otherwise part of the LGBTQ community.”

When confronted with these findings, which had been made public the previous night, VanDyke became emotional in the middle of the hearing and began crying. His face turned red.

Lawrence VanDyke brought to tears because of the shameful and false accusation by the @ABAesq that he holds animus… https://t.co/2BwuU3nI7R
— Gregory T. Angelo (@Gregory T. Angelo)1572452894.0

“I do not believe that,” VanDyke said, referring to criticism of his views of LGBT people, according to CNN. “It is a fundamental belief of mine that all people are created in the image of God.” He added that he thinks “they should all be treated with dignity and respect.”

Writing for the conservative National Review, Thomas Jipping wrote that of the ABA: “[It’s] reasonable to ask whether this consistently liberal organization can really be objective and non-political in its ratings of judicial nominees.” He called the devastating letter about VanDyke “another self-inflicted wound” for the organization.

Orin Kerr, a University of California law professor, noted on Twitter: “I don’t think I’ve seen anything like this before, which I say realizing that some will say it shows how unqualified the [nominee] is, while others will say it shows how biased the ABA is. I don’t know which is true. But either way, it’s a remarkable letter.”

In the hearing, Sen. Sheldon Whitehouse (D-RI) noted Wednesday that there have been many criticisms of the ABA review process, some of which he agrees with. In particular, he acknowledged that the ABA’s conclusions are opaque, and it doesn’t provide the background documentation of its investigations.

South Carolina Republican Sen. Lindsey Graham, the chair of the committee, said he agreed with these criticisms.

“We actually have something we can do about that,” Whitehouse said. “I’ve been on this committee awhile. ABA letters are always this way. They don’t give you the underlying backup. But what we do have here is some pretty darned serious concerns. And to just laugh them off, I don’t think is appropriate. I think we have a responsibility here. … We can resolve this by bringing in the ABA folks and letting them explain what the basis was for these charges.”

Right-wing 'snowflakes' are 'burning books' thanks to their outrage over CRT: op-ed

Writing in The Bulwark this Thursday, Charlie Sykes contends that the right-wing is emulating the leftist "cancel culture" they claim to despise.

As an example, Sykes cites a story out of Pennsylvania where an all-white school board banned a list of educational resources such as a children's book about Rosa Parks, Malala Yousafzai's autobiography and CNN's Sesame Street town hall on racism. He also points to Tennessee's Republican governor, who signed a new law which bans the teaching of ideas linked to "critical race theory."

The country is particularly exposed to Europe's ongoing energy crisis due to its reliance on natural gas to generate electricity. The price of European gas futures has more than doubled since May.

Biden is leaning toward releasing information about Trump and aides on Jan. 6 to the public: report

The Washington Post is reporting that President Joe Biden is leaning toward releasing any information involving former President Donald Trump and his aides during the Jan. 6 attack on the U.S. Capitol.

According to the report, it could have some "significant political and legal ramifications."