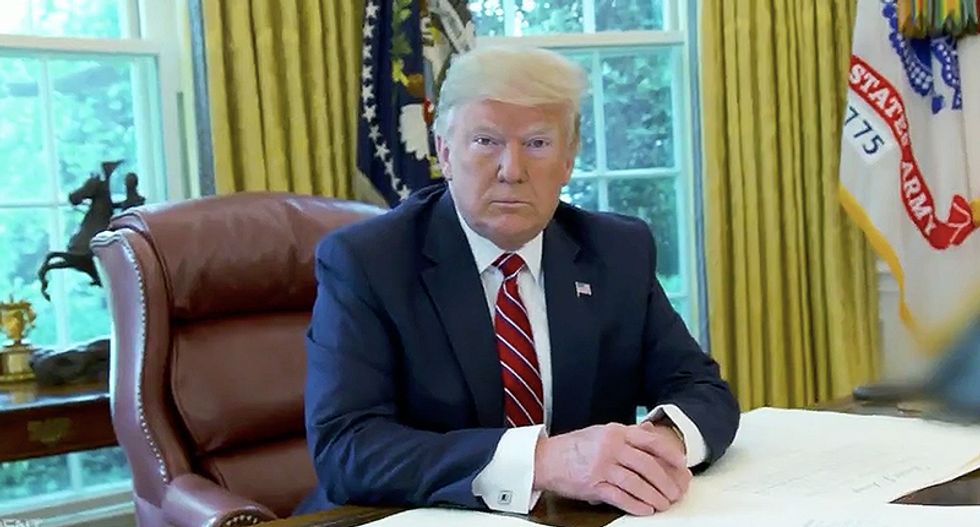 President Donald Trump has long claimed that any investigation into his administration was a "witch hunt." But as polls have shown growing support for impeachment, he has now escalated his rhetoric against checks and balances.

On Tuesday, Trump claimed that there was a "coup" occurring in America.

A coup d'état refers to an illegal overthrow of an existing government.

However, an impeachment proceeding is not illegal -- it is written in the Constitution -- and it wouldn't overthrow the existing government as Republican Vice President Mike Pence would ascend to the presidency.

That Trump was unfamiliar with the situation provided much fodder for the commander-in-chief to be mocked online. Here's some of what people were saying:

Wait till Trump hears the one about the guy who got millions fewer votes and still became President https://t.co/JwkNsUgFcZ
— Dan Pfeiffer (@Dan Pfeiffer) 1569974099.0

The president describes the constitutionally outlined process of impeachment as a “coup” because he thinks of himse… https://t.co/CaU6wLuVcL
— Adam Serwer 🍝 (@Adam Serwer 🍝) 1569973992.0

I, the president, have determined that WITCH HUNT is no longer working against the bad fake polls so I will therefo… https://t.co/tkFduKQupa
— Peter Hamby (@Peter Hamby) 1569974281.0

Every time the President Tweets about a coup or a civil war, he is making Vladimir Putin’s wildest dreams come true… https://t.co/2hNdeD3sxN
— David Cicilline (@David Cicilline) 1569974235.0

It’s a coup for Congress to use its constitutional powers? https://t.co/DPPzXmUUbw
— Chris Megerian (@Chris Megerian) 1569973663.0

Trump has in the last couple days: -Suggested Schiff should be arrested for “treason” -Endorsed a comment suggesti… https://t.co/bLy5oZlEzF
— Kyle Cheney (@Kyle Cheney) 1569973593.0

If it was a coup, Congress wouldn't be going to the trouble of applying the legal, constitutional mechanism created… https://t.co/5oGbB4Lq5E
— Robert Maguire (@Robert Maguire) 1569974568.0

Trump is now claiming that he's the victim of a coup, after demanding the arrest of a U.S. congressman for treason,… https://t.co/kldNtLH6rT
— Matthew Gertz (@Matthew Gertz) 1569973607.0

And the circle is now complete: Trump repeats the claim, which has been all over right-wing media in recent days, t… https://t.co/7athkAqZGJ
— Oliver Darcy (@Oliver Darcy) 1569973774.0

@realDonaldTrump Call it whatever you want. You are a psychopath and your time as wannabe dictator is almost at an end, dick.
— God (@God) 1569974379.0

if you guessed that trump got this from fox news and family, as usual you are probably right. conservative media is… https://t.co/u8IJtyDDcE
— Bobby Lewis (@Bobby Lewis) 1569974394.0

Trump declares there is a ‘COUP’ being waged in America in escalation of his rhetoric against impeachment https://t.co/3NMh3tln2M
— Raw Story (@Raw Story) 1569973910.0