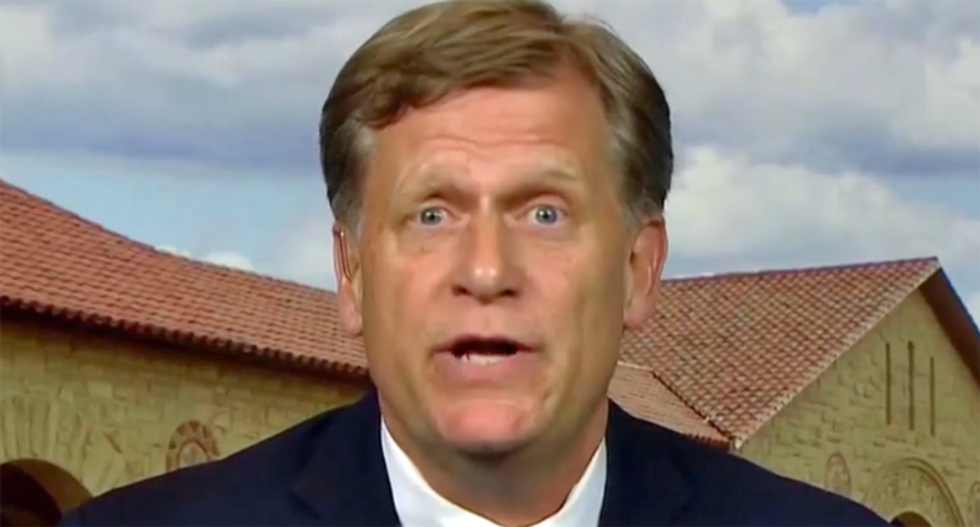 America's former ambassador to Russia explained how their state media is celebrating President Donald Trump's capitulation in Ukraine and Syria.

"How do you think this should play out, now that they are assembling step-by-step insider accounts with people who are bravely stepping forward, some giving up their careers, Mike McKinley and others having had to quit over this," Mitchell noted. "How do you think this plays out legally or in terms of the politics of impeachment?"

"Well, legally, I’ll defer to others who are more expert. I think what it does underscore is how grossly inept and just broken down the Trump foreign policymaking process is," McFaul replied.

"By the way, this is not just a Ukraine story. I think you see the exact same thing happening with respect to his decision on Syria, where instead of having an interagency process where the president sits in the White House Situation Room next to a Secretary of Defense, next to a Secretary of State and the entire members of the NSC -- he’s sitting in his residence on the phone, based on his intuition or his personal interests is a way to conduct foreign policy," he explained.

"And I think it’s a complete disaster for American national security interests," he continued. "Whether it’s illegal or not, I’ll leave to other people to judge. But in this case, in both cases -- but especially the Ukrainian case -- you know, what we’re seeking to achieve in terms of our national security is being undermined by the personal interests of the president and these lieutenants he’s hired to help him in the process."

"In the last 24 hours, Erdoğan in Turkey has said he will meet in a number of days with Vladimir Putin, but has indicated he does not want to meet with Mike Pence and the Secretary of State, who are on their way this afternoon, headed to Ankara for meetings, Mitchell said. "What does it tell you about Russia's hold on the region?"

McFaul said, "Vladimir Putin is the big winner here. They are joyous in Moscow. You should watch the television these days."

"After an impasse, they were disappointed with what President Trump did for them after he won the election. But now they are seeing the returns on that investment, where they tried to help President Trump win in 2016," he explained.

"In the two domains, Andrea, that were the most confrontational when I was in the government, Ukraine and Syria -- we spent more time arguing with Vladimir Putin about those two different portfolios -- and on both now you see capitulation from President Trump," he noted.

"These are big, giant victories for Vladimir Putin," McFaul concluded.