Trump's hurling around accusations of 'treason.' But it isn't projection — it's strategic 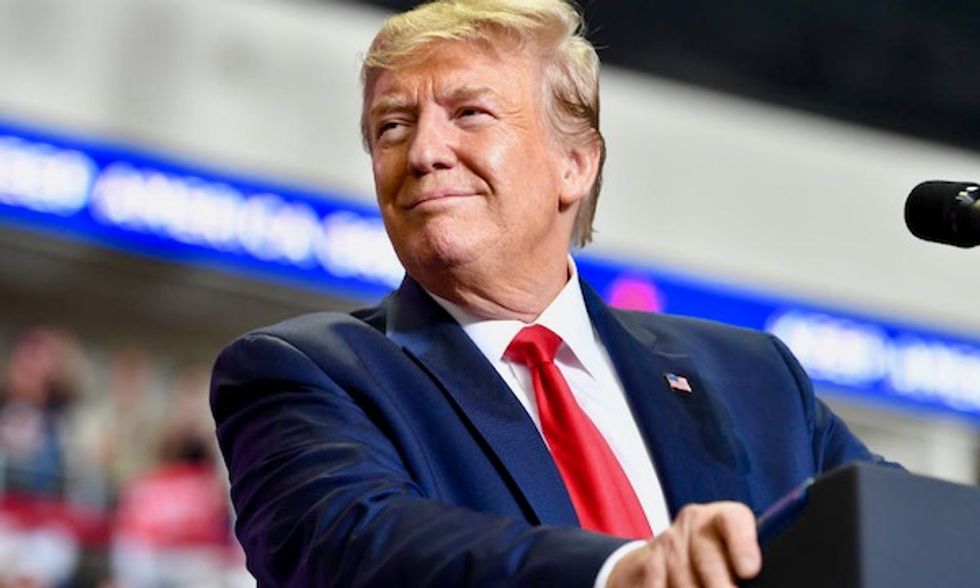 Trump has been hurling around charges of Treason lately. Lots of them.

He's launched them against Adam Schiff, Chairman of the House Intelligence Committee; the entire Russian Investigation, including but not limited to Robert Mueller’s team; Jerry Nadler, Chairman of the House Judiciary Committee; James Comey, previously Director of the FBI; Andrew McCabe, former Deputy Director of the FBI; Peter Strozk, former Chief of the Counterespionage Section of the FBI; Lisa Page, former FBI attorney; the rest of the FBI; the New York Times; The Washington Post; "the fake news," which encompasses all legitimate news organizations, and whomever told the whistleblower all that stuff.

That sounds like a list of America's Most Reputable. An assemblage of the Upright and True. The Best that the Establishment Has to Offer. The charges are absurd and patently false.

So why is Trump doing it?

The conventional answer is that he's cornered. He's desperate. He knows he's in trouble. So he's lashing out. Irrationally. Maybe he’s even gone off the deep end. So he's flailing, and incidentally revealing his ignorance of what treason actually is, of the Constitution, and more.

If we look at Trump's actual history there is a much better explanation.

If anyone is unfamiliar with the concept, a tell is a poker term. It refers to an action or an attitude or a manner of a player that reveals what he or she wants to keep hidden.

The things that Trump accuses his opponents and enemies of - especially when it doesn't apply or is only marginally accurate - "tell" us something about Trump. Indeed, his tells point to the very worst things about him within the context of the situation.

A relatively benign example was attacking Obama for playing too much golf. If Trump's tell was read correctly, we would have known he'd play more than twice as much, it would cost the treasury more than four times as much, and he'd have some of that money sliding back into his own pockets.

During the Republican presidential primaries of 2016, he constantly called Ted Cruz, the last opponent left standing, "Lyin' Ted." Ted may not be especially honest, but when it comes to lyin', he's a minor leaguer while Trump is the Babe Ruth, Barry Bonds, Joe DiMaggio, and Ty Cobb of lyin', all rolled into one.

During the campaign, Trump attacked the Clinton Foundation.

While it's possible to have issues with certain aspects of the Clinton Foundation, it actually spends the bulk of its money on good works. That time, it seems, the NY State Attorney General heard the accusations as a tell. He - and then She - looked at the Trump Foundation. They found it to be "little more than a checkbook to serve Mr. Trump’s business and political interests,” engaging in “a shocking pattern of illegality.” It was dissolved by court order. The judge found the Trumps to be so corrupt, he ruled that even dismantling it had to be supervised.

His name for Ms. Clinton, was "Crooked Hillary." No president has ever been more crooked than Donald.

According to Trump, “Hillary Clinton only cares about power, money and herself.”

This week, in the midst of an epic presidential tantrum that even caused Republicans some pause, he said of Adam Schiff, "I think he's having some kind of a breakdown."

If there was a Pinocchio's Nose of Fingers, you'd see Trump's finger springing backward and pointing right at himself. Though sadly for him, not growing any longer.

A tell should be, and normally is, counter-productive. But for Trump, it's a very effective Trick.

Trump knows his own sins. He may think of them as just fine, or even as virtues, but he knows which things other people will see as improper, immoral, craven, and even criminal.

The trick is to go after his opponent first with whatever Trump expects others to accuse him of.

That blunts - even disarms - the attack on him when it comes. It looks like a tit-for-tat. Our instinct is to think the first accuser is likely to be right.

Sometimes Trump is taken by surprise and he can't get the first smear in, as with the Access Hollywood ("grab ‘em by the pussy") tape. The response was to throw double mud by marching Bill Clinton's accusers into his debate with Hillary Clinton and sitting them in the front row.

If they're both wrong, that's fine. It devalues the charge. Look, everyone does it. Or at least us two. Therefore, it hardly matters.

Sometimes it works better if the opponent isn't guilty. Trump says Joe Biden is corrupt. Biden is one of the cleanest people in big time politics. That's why he hasn't been under constant investigation, why he hasn't been charged, let alone convicted of anything. But with Trump’s primary trick, he paints himself as unfairly singled out, since they're not doing it to Joe, and he insists they look at Joe or admit that they aren’t being fair.

It blunts the accusation, it dilutes the charge (lots of people do it, are you going to arrest the whole town?), and finally, it devalues the crime itself (I did it to fix a wrong, it can't be a crime because I'm president, it was the right thing to do).

One of the standard psychological explanations is that accusing others of his being guilty of his own flaws is projection. It's not. It's a tool. It's a technique. Fred Trump, Donald's father, committed frauds, lied, and cheated. When challenged, he was ingenuous. He didn't know it was wrong. Doesn't everyone do it that way? It's just paperwork. And so on. Donald was Fred's chosen one and his best follower.

We know that later on Trump joined up with Roy Cohen, who upped that game. Trump tried it on, practiced it, used it, learned from it, and embraced it.

Right now, his tell is "treason." Based on what we know about Trump, based on a very clear and obvious track record, he is telling us that if we can get past all the yowling and cawing and obfuscation by a new generation of Roy Cohens (Rudy Giuliani, Bill Barr, Mike Pompeo, Lindsey Graham), what we will see will look to us a lot like treason.