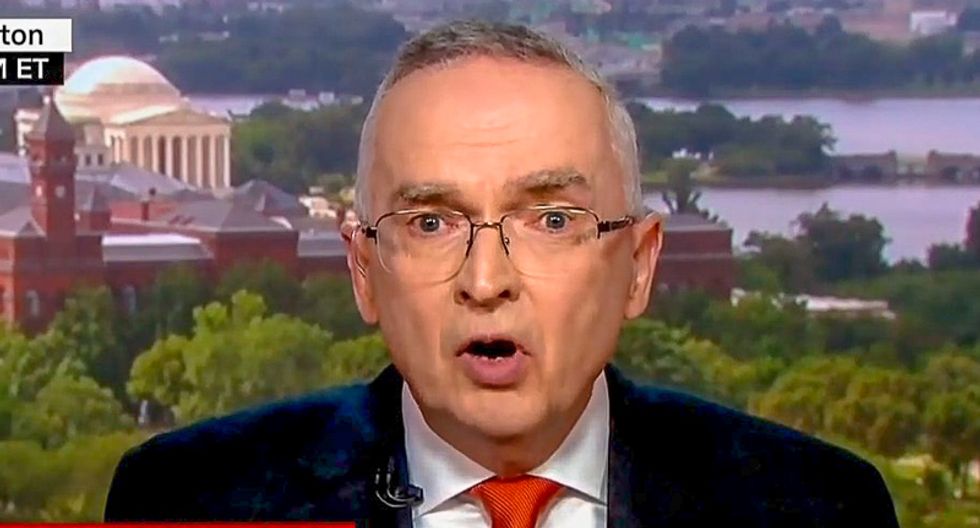 "Colonel Peters, you just heard the president say he's 'Not siding with anybody,'" said Cooper. "He claims he told Turkey's President, [Recep] Erdoğan, that there would be 'trouble' if anything 'outside of what we think is humane' happens. Can the Kurds count on that?"

"No, of course not," said Peters. "The president, unfortunately, he lies like a little boy caught stealing from his mom's purse. When you unilaterally withdraw the U.S. forces, the trip-wire forces protecting the best allies we have ever had in the Middle East outside of Israel, at the behest of an Islamist despot who despises the United States and wants to slaughter our best allies, then I'd say you're taking sides, Anderson."

"I feel like we're on 'Saturday Night Live,' but, my God, 'in my unmatched wisdom,' you can't believe a word Trump says and he was surprised by the backlash," said Peters. "I mean, clearly on a phone call, Trump lives in the moment. Erdoğan called him. Trump did what Erdoğan told him to do, convinced it was the right thing to do, was shocked by the backlash even from Republicans, who amazingly found some spine on this, and now he's waffling, backtracking, he doesn't want to leave the forces there. Then it looks like he folded. Right now, while the Kurds are under great threat, Trump doesn't know what to do. My concern is that Erdoğan, who has just been itching to kill the Kurds, to slaughter them, may move pretty quickly."

"It also — I mean, the message it sends to other nations or other groups who might, you know, in the future — that the U.S. might need to work with," added Cooper.

"Trump has consistently attacked our allies, great and strong, from NATO to the Kurds," said Peters. "At the same time, he has repeatedly and enthusiastically embraced despots, Kim Jong-Un, Erdoğan of Turkey, el-Sisi in Egypt, President Xi with an on and off relationship, and let us not forget Vladimir Putin, whose birthday it is today and who is set to profit greatly from the U.S. abandonment of the Kurds."

"You know, first of all, the Syrian government, Russia's client and the Iranians, are also ready to pounce, not just the Turks," continued Peters. "The Kurds may be forced, as we abandon them if Trump lives up to this and does that, they may be forced into the arms of Iran, for God's sakes, and the Russians. So with his impulsive idiocy last night, Trump has endangered not just the Kurds, but the progress made against ISIS and in fact the entire region. It's amazing that so small a gesture to Trump could have world-shaking reverberations."