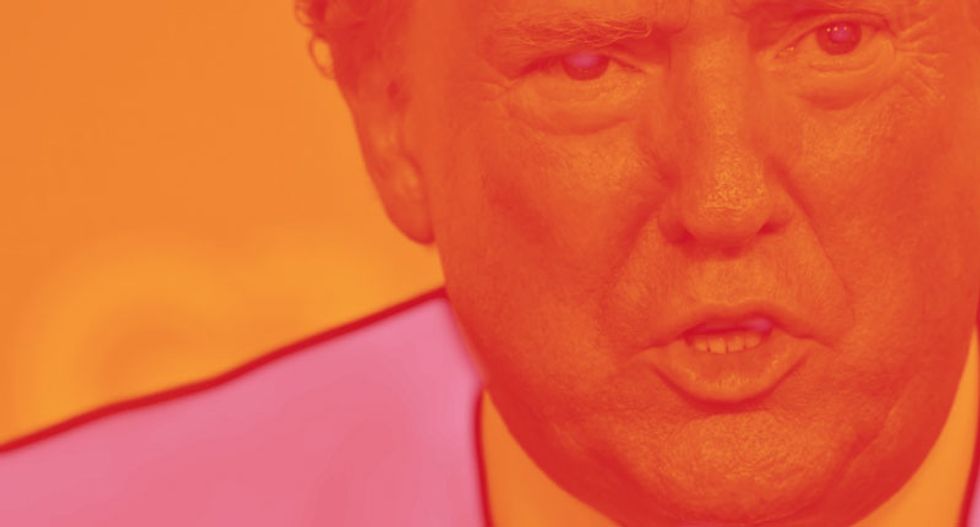 Last Friday I wrote about the origins of the Joe Biden-Ukraine conspiracy theory, when the same professional hitmen who pushed the "crooked Hillary" story about alleged influence-peddling with the Clinton Foundation produced a book alleging that Biden had leveraged his power as vice president to help his son's business. (The evidence shows that not only did Biden not do that, the actions he took were actually detrimental to his son's case.)

All that is almost hilarious in light of this AP report that broke late on Sunday night in which it was revealed that  close associates of Trump's fixer Rudy Giuliani and Energy Secretary Rick Perry have been doing some lucrative influence-peddling of their own, trying to leverage their relationships for shares in a natural gas company in Ukraine. Trump is now trying to blame Perry for that misguided phone call to Ukrainian President Volodymyr Zelensky that led to the impeachment inquiry. It's never a dull moment in this Ukraine scandal.

It's clear, however, as the quote above shows, that while Trump was happy to tar his political rival Joe Biden, his true interest in Ukraine lies in his ongoing obsession with a daft conspiracy theory that he and Russia were both set up by the FBI, the CIA and the foreign services of several key U.S. allies, along with Ukraine, the Democratic National Committee and the Hillary Clinton campaign. The ostensible goal was to destroy his campaign and if that didn't work, his presidency. Trump seems to have convinced Attorney General Bill Barr, Secretary of State Mike Pompeo and at least a few U.S. senators that this is a legitimate line of inquiry.

Barr has been running around the world, accompanied at times by the special prosecutor he assigned to investigate the matter, interviewing the heads of the intelligence services of various allies. He asked the president himself to intervene with certain heads of state to get their cooperation with the probe.

The specific aspect of the conspiracy theory that took Barr to Italy this past week was laid out in detail by Lucian K. Truscott IV in Salon on Sunday.  In a nutshell, it all revolves around onetime Trump "coffee boy" George Papadopoulos and Joseph Mifsud, the mysterious "professor" who told Papadopoulos that the Russians had dirt on Hillary Clinton — which Papadopoulos in turn drunkenly shared with the Australian high commissioner to the U.K. in a pub a few weeks later. That led to the Aussies sounding the alarm to the U.S., which led to the FBI taking a look to see whether Russians were trying to interfere in the presidential election.

Giuliani has been running his mouth about this for months calling Mifsud a "counterintelligence operative, either Maltese or Italian" and Papadapoulos has been tweeting as if he's a high level investigator for the Department of Justice:

He's quite the super-sleuth. It's his wild imagination that has fueled this particular conspiracy theory, along with the bizarre 4chan storyline that suggests the security firm CrowdStrike framed Russia on behalf of the DNC. Trump mentioned that in the phone call with Zelensky, but seems to have embellished the conspiracy theory even beyond the ludicrous narrative right-wingers had previously laid out. According to NBC News, when the president said  “I guess you have one of your wealthy people. ... The server, they say Ukraine has it,” people who knew the context thought that "Trump’s call felt detached from any sense of logic." How unusual.

Sen. Ron Johnson, R-Wis., seems to think this whole thing makes sense, however. He appeared on "Meet the Press" on Sunday and shared his thoughts on the matter:

If that sounded a bit scattered, here's Pompeo pretending that everyone in the administration is just doing their jobs:

“It is not only appropriate, but it is our duty to investigate if we think there was interference in the election of 2016,” Mr. Pompeo said in Athens. “I think everyone recognizes that governments have an obligation — indeed, a duty — to ensure that elections happen with integrity, without interference from any government, whether that’s the Ukrainian government or any other. And so inquiries with respect to that are completely important.”

He added: “There’s been some suggestion somehow that it would be inappropriate for the United States government to engage in that activity, and I see it just precisely the opposite. I see our duty to engage in activity that ensures that we have fair, free elections.”

Keep in mind that Pompeo was first appointed as Trump's CIA director, and led his own investigation which found no wrongdoing by the agency.  Yet he came out and gave that sanctimonious little speech legitimizing this loony conspiracy theory. Even he has to pay homage to Trump and his consigliere Giuliani's febrile fantasies. Frankly, he doesn't seem to mind.

The Wall Street Journal reports that U.S. allies are becoming increasingly irritated by this ridiculous crusade. Barr is going outside the normal channels, riling up internal politics in their countries and basically making a hash of America's foreign policy. He and Pompeo may just be trying to soothe Trump's massive ego — or maybe they've drunk the Kool-Aid too. In the end, that doesn't much matter. The most powerful nation on earth is clearly being run by a bunch of kooks. It's hard to see why anyone else would ever trust us again.