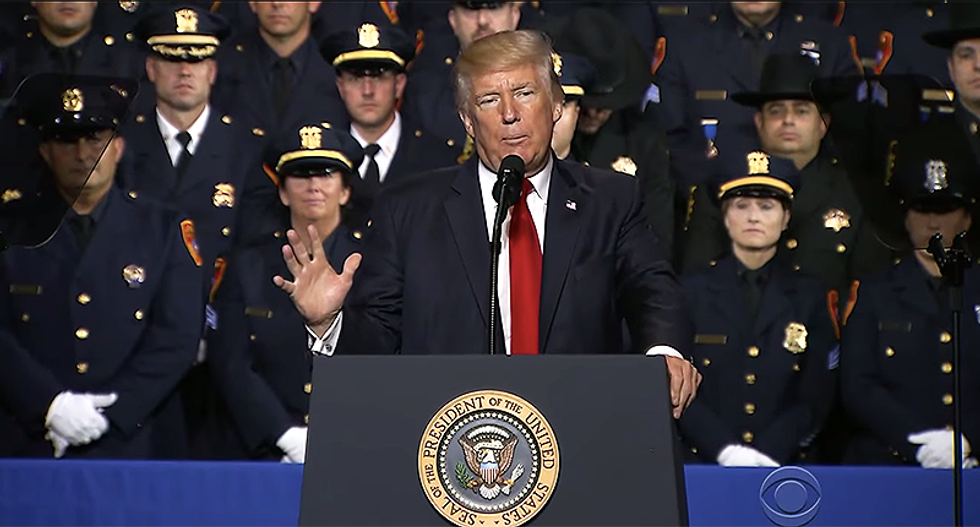 President Donald Trump on Monday delivered a rambling speech in front of police in Chicago in which he repeatedly trashed their city while also disparaging Chicago Police Superintendent Eddie Johnson.

Among other things, Trump called Chicago an "embarrassment" to the nation, falsely claimed that it was more dangerous than Afghanistan, and accused Johnson of putting "criminals and illegal aliens before the citizens of Chicago."

Many police in the audience cheered the president as he attacked both their city and their superintendent, which led to some horrified reactions from both Chicago residents and outsiders alike.

This is disgusting. Chicago police clearly have NO interest in healing the divides between themselves and the comm… https://t.co/QiLHmqFVQJ
— K - Voice (@K - Voice) 1572278771.0

Pretty scary to see and hear the Chicago police cheering for Trump today. Confirms a lot of racist cops, which may not be news
— yung Banana🧢 (@yung Banana🧢) 1572278811.0

Trump is at the podium bitching to a bunch of cops about crime in Chicago. What concerns me more is the crime wave in the White House.
— Michael Sexton (@Michael Sexton) 1572278700.0

@TeaPainUSA He comes to my hometown #Chicago and goes on to continuously insult all its residents. And in true Trum… https://t.co/rHIMkRdvJe
— AdaminChicago (@AdaminChicago) 1572282186.0