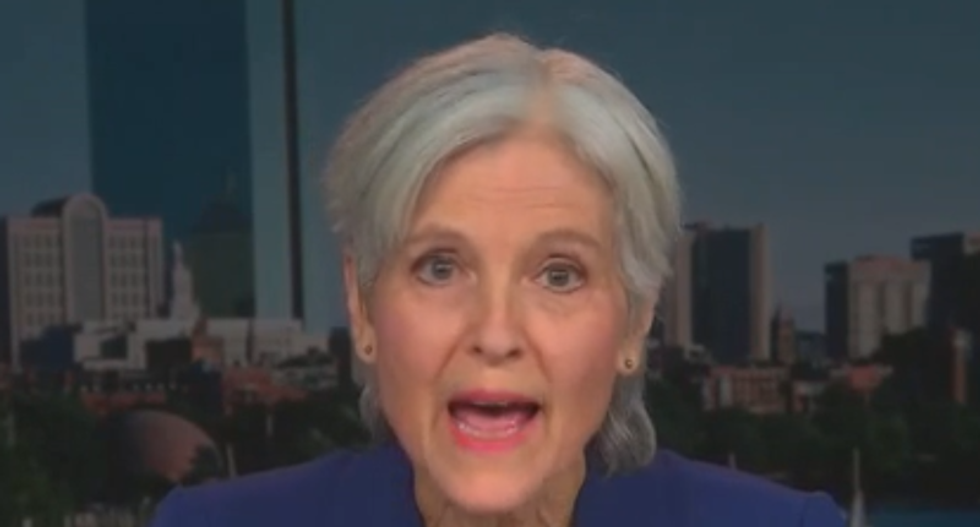 On Saturday, center-right CNN host Michael Smerconish invited 2016 Green Party candidate Jill Stein on air to discuss Hillary Clinton's characterization of her as a Russian asset. But under the slightest pushback, Stein derailed the conversation with a stream of false equivalence and dodges.

"Do you think that she's trying to draw a nefarious inference from that photograph we've seen so many times of the dinner that you attended at which President Putin was present?" asked Smerconish. "I think that Gen. Flynn was somebody else at the table. Is that what's driving her, as far as you know?"

"Let me just say there are many more pictures of Hillary Clinton having intimate conversations with Putin whispering in her ear," said Stein, completely ignoring the fact that Clinton was Secretary of State at the time. "And we actually know there was real money exchanged, for example, when her husband was paid something like half a million dollars to give a single speech to a Kremlin-connected Russian bank associated with the sale of part of the U.S. uranium approved by Hillary Clinton." (This has been repeatedly debunked.)

She added that, "Attending a conference, I went to tell Russia they needed to stop bombing Syria and advocate for a cease-fire in the Middle East, that's a good thing. I think we need more of that kind of dialogue. You have to talk with your adversaries as well as with your allies."

"And I think, you know, she and the Democratic Party have been in that business [of intimidation] for a long time," Stein concluded. "As I mentioned, ranked-choice voting solves this problem of, you know, worrying about, is your vote going to have unintended consequences? The state of Maine, the entire state, has adopted ranked-choice voting. It could be adopted in a heartbeat by legislatures across the country. It eliminates the hysteria about spoiled elections, and it really liberates people to be able to vote for what you want instead of against what you fear. We know from polls most people who voted for Donald Trump were not voting for him. They were voting against what they saw as his only opponent. We need that change to our voting system and could have it now."