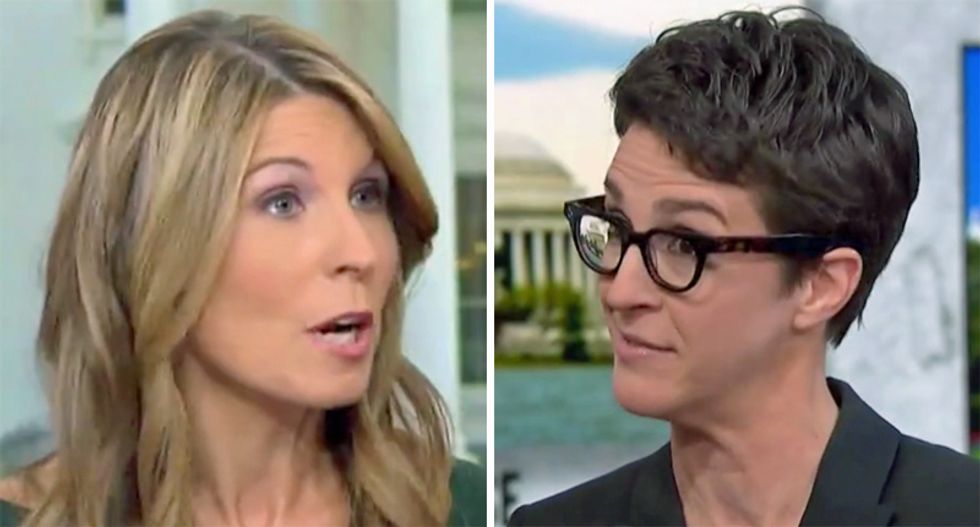 The host of "The Rachel Maddow Show" explained to MSNBC's Nicolle Wallace on Friday how she keeps track of all of the details contained within President Donald Trump's constant flood of scandals.

"With each new story we get new proper nouns, new people we have to learn their position and whether or not they’ve been fired or resigned from, new questions about whether they’re complying with subpoenas," Maddow noted. "It’s just getting bigger and bigger and bigger."

"And for me, the way that I’m able to keep track of it is in terms of articles of impeachment, right? Like, they’re going to impeach the president for asking a foreign power to intervene in the election. We’ve got an admission from the White House that he did it when they gave out — we’ve got the admission from the president that he did it on the South lawn. So that’s the article of impeachment," she explained.

"All of the stuff about the text messages and the emails and the documents, both in the stuff that the inspector general from the State Department handed over, all of this stuff as interesting as it all is, all it shows is that it wasn’t just some whim of the president. He put these orders into effect. He made the administration try to carry this out," Maddow explained. "Okay. So that goes toward that initial article of impeachment."

"And then all this stuff about how the whistleblower complaint was handled, having the inspector general for the intelligence community in there today, that’s all the separate article of impeachment which will be about obstruction -- whether or not they tried to cover this up," she continued.

"And then we got a new probably a new article today or at least something toward it with them turning the impeachment inquiry toward Vice President [Mike] Pence as well," she noted. "The impeachment is extended to Vice President Mike Pence and that’s a very important step in terms of politically and to these guys."