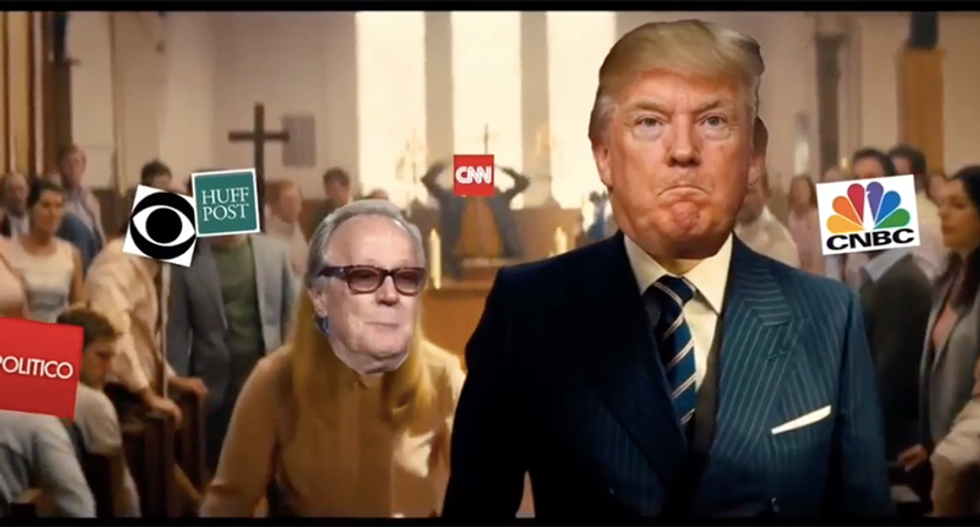 Supporters at President Donald Trump's Trump National Doral Miami showed a video depicting the president conducting a mass shooting. Instead of people's heads, however, it was replaced with logos of media outlets like PBS, NPR and others.

In the past, the president has advocated violence against CNN or other media, but has stopped short of advocating a mass shooting.

"Several of Mr. Trump's top surrogates — including his son Donald Trump Jr., his former spokeswoman Sarah Huckabee Sanders and the governor of Florida, Ron DeSantis — were scheduled to speak at the three-day conference, which was held by a pro-Trump group, American Priority, at Trump National Doral Miami," The New York Times reported Sunday. "Ms. Sanders and a person close Mr. Trump's son said on Sunday that they did not see the video at the conference."

The video even uses the Trump campaign logo, combined with a series of internet memes. The violent clip came from the film "Kingsman: The Secret Service" in a scene where an agent was being manipulated by a chip in his brain. He ultimately ended up killing everyone in the church.

A person in attendance sent clips of the video on their cell phone and sent it to the New York Times, but the video has been uploaded to YouTube.

“Content was submitted by third parties and was not associated with or endorsed by the conference in any official capacity,” said event organizer Alex Phillips. “American Priority rejects all political violence and aims to promote a healthy dialogue about the preservation of free speech. This matter is under review.”

Sarah Huckabee Sanders said that she was really only in attendance for a prayer breakfast.

“That video was not produced by the campaign, and we do not condone violence,” said Trump campaign spokesperson Tim Murtaugh.

The video appears to come from an account with the handle "TheGeekzTeam," noted Media Matters researcher Alex Kaplan.

The video appears to come from the account "TheGeekzTeam." The account is listed as a creator for Meme World, the s… https://t.co/9BXmzAtpJx
— Alex Kaplan (@Alex Kaplan) 1571016979.0

Read the full report from The Times and you can watch the video below: